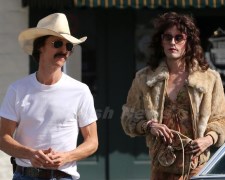 When the Academy Award nominations were announced a few weeks ago, the one film that caught many pundits off guard was Dallas Buyer’s Club. It picked up 6 nods including best picture. Stars Matthew McConaughey and Jared Leto are the frontrunners (at least according to the bookies) in the categories of best actor and best supporting actor.

The film begins in 1985 and introduces us to a “blokey” guy by the name of Ron Woodroof (McConaughey). He works as an electrician, he moonlights as a rodeo cowboy, and he runs from people to whom he owes money. After a small workplace accident, Ron is taken to hospital and is given some shocking news from his doctors. His blood tested positive for HIV and he has roughly 30 days left to live.

That news sets the stage for what is quite an encompassing film. It’s trying to explore a lot of angles and it does a good job, as opposed to a great job. First and foremost, it’s providing a not-so-flattering portrayal of the Food and Drug Administration (FBA) authority. Ron was prepared to try any drug that might help, including those that hadn’t been properly tested in the United States, but the FDA put up road block after road block. They weren’t sympathetic to his plight.

It prompted Ron to establish the Dallas Buyer’s Club – an association for those who were HIV-positive. Membership was $400 a year and that entitled them to a regular supply of untested drugs secretly imported from overseas. Ron was able to circumvent the FDA’s rules because his customers weren’t directly buying drugs… they were buying club memberships.

Ron’s reasons for starting the Club were wholly self-motivated (he was trying to prolong his life and make some decent cash) but that started to change over time. He became friends with many of his customers, most of whom were homosexual, and it opened his eyes to a world he has always shunned. It’s here where Jared Leto gets his chance to impress as Ron’s transgender business partner.

Craig Borten originally wrote the screenplay for Dallas Buyer’s Club back in the early 1990s but it took two decades to secure the finance to get it into production. It’s hard to believe given the acclaim it’s now receiving. The director who stepped up to the plate is Canadian Jean-Marc Vallée – who I admired for his 2005 film C.R.A.Z.Y. and have followed ever since.

Three years ago, if you told me that Matthew McConaughey might win an Oscar, I’d have laughed. The guy was making crappy rom-coms including Failure To Launch, Fool’s Gold and Ghost Of Girlfriends Past. Things started to turn with The Lincoln Lawyer (released in mid-2011) and he’s built on that momentum ever since. He’s at his charismatic best in Dallas Buyer’s Club. He also dropped roughly 20kgs before taking on the roll thanks to a diet of egg whites, chicken and Diet Coke.

The movie gives off mixed messages at times. It looked to be demonising the FDA (for better or worse) but a few moments during the film suggested otherwise. The relevance of certain supporting characters (such as Jennifer Garner as Ron’s doctor) was also questionable. That said, it’s still a debate-generating film that’s worth your time and money.