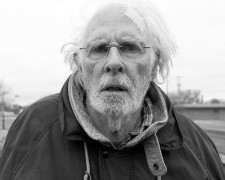 The opening shot in Nebraska is that of an old man slowly walking down the side of a busy road. His name is Woody Grant (Dern) and he has set out on a 1,300km trek from his home in Billings, Montana. It’s not a “bucket list” thing. It’s not a “raise money for charity” thing. Woody believes he’s won a $1 million sweepstakes prize and so he’s trying to walk to the company’s offices in Lincoln, Nebraska to claim it.

So why isn’t he being driven by his family? Well, they know that Woody hasn’t won the $1 million prize. The letter that arrived in the mail is just a standard gimmick used by publishing companies to make people buy magazine subscriptions. They try to explain this to the eighty-something year old Woody, who is showing early signs of dementia, but he just doesn’t comprehend. He’s convinced he’s won the money. It prompts his wife (Squibb) to say “I didn’t know the son of a bitch even wanted to be a millionaire!”

Left with no other option, his son David (Forte) takes a few days off work and agrees to drive him. It’ll be a chance for them to spend some quality time together (something they haven’t done in a while). Further, once they reach the sweepstakes offices, Woody will finally understand that he’s not a prize winner. They can then drive back home and life can return to normal.

If you’ve seen the trailer, you’ll know that things don’t quite go as expected. A quick detour through Woody’s old home town of Hawthorne goes pear shaped when he starts telling all his old friends that he’s now a millionaire. Some folk are happy for Woody. The local newspaper wants to do an article on his “rags to riches” story for example. On the flipside, some folk are not so happy. Old business partners and seldom-seen family members are now buttering him up and seeking a slice of the cash. It’s starting to get out of control…

Accompanied by a sleepy music score from composer Mark Orton, Nebraska is another wonderful feature film from director Alexander Payne (Election, Sideways, The Descendants). Curiously, this is his first film where he isn’t also credited as a screenwriter. Payne was shown Bob Nelson’s script by two colleagues and asked who he thought would be a good fit as a director. His response – “how about me?”

As a huge fan of the early years of cinema, Nebraska has allowed Payne to do something he’s always wanted to do – make a black and white movie. It’s not a silent film but you can see that dialogue has been used sparingly. There’s a great scene where Woody and his brothers are sitting in a living room in front of the television. They’re not a talkative bunch. Words aren’t required though. Just watching them put a smile on a face.

Using a mix of both professional and non-professional actors, Payne has brought together a superb cast. In the leading role, 77-year-old Bruce Dern (Coming Home, Monster) has created a character that is tragic yet funny, repulsive yet endearing. When asked why he’d never left his wife, despite years of bickering, his response sums up his harsh, forthright persona – “I’d just end up with someone else who’d give me shit all the time.”

Of the 9 best picture nominees at the upcoming Academy Awards, Nebraska is the last to receive a release here in Australia. It’s therefore with a tinge of sadness that another “awards season” comes to a close. It’s now time to prepare for a myriad of reboots, remakes and sequels. Oh, and a bunch of stuff involving over-the-top action and comic book heroes. Brace yourself.