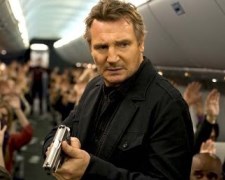 Twenty years ago, Liam Neeson was nominated for an Academy Award for his portrayal of Oskar Schindler in Steven Spielberg’s masterpiece, Schindler’s List. He followed that with leading roles in films such as Nell, Rob Roy, Michael Collins and Les Misérables.

Few would have predicted his career path thereafter. The Liam Neeson that today’s audiences are familiar with is an action hero. After being “rediscovered” in 2008’s Taken, we’ve seen him in such films as Clash Of The Titans, The A-Team, Unknown, The Grey, Wrath Of The Titans and Battleship. It’s only a matter of time before someone pairs him up with Jason Statham for some super-dooper action thing.

In Non-Stop, Neeson plays Bill Marks – an alcoholic air marshal who has boarded what he believes will be routine flight from New York to London. That is until he gets a text message on his mobile phone. It’s from someone threatening to kill a passenger every 20 minutes unless $150 million is transferred into a nominated bank account. That’s a lot of money. I know I could live comfortably with 10% of that but hey, I’m not a crazy terrorist so who am I to second guess them.

Anyway, I like the set up. The entire film is set on the plane and it makes for a surprisingly suspenseful action thriller. It’s the pilot who says what we’re all thinking – “how do you kill someone on a crowded plane and get away with it?” It’s a good question and it’s one that will soon be answered. Several passengers end up dead and Bill can’t seem to put the pieces together. Things get even messier when the remaining passengers start airing their suspicions. They think it’s Bill who’s behind the murders…

Non-Stop held my attention for longer than I expected. It’s trash… but it’s still intriguing. We’re introduced to a lot of characters inside the first half hour and you’ll be speculating as to who is the culprit and what is their motivation (my early guesses were way off the mark). While it’s now a trademark role for Liam Neeson, he again deserves praise for creating another compelling, likeable protagonist.

There are problems with the finale. As tends to be the case with films of this nature, everything falls conveniently into place for the villain... until the very end when it call comes unstuck because of something quite trivial. That’s certainly the case here. It’s the kind of movie where the more you think about it, the less sense it makes.

While I’ve always believed that the best action-thrillers are those based on a realistic scenario, Non-Stop provides just enough entertainment to sneak through with a passing grade.