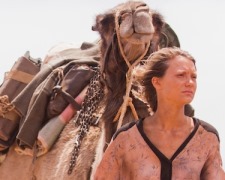 In the mid-1970s, most 27-year-old Australians would be settled on a career path and thinking about getting married (if not already). That wasn’t the case with Queensland-born Robyn Davidson. She was bored of the city life. She was tired of her generation. It was time to escape, time to go on an adventure, time to “discover” who she really was.

In 1977, she set out on a 2,700km trek from Alice Springs to the west coast of Australia. She was guided by a map, her loyal dog and four feisty camels. That’s it. Davidson didn’t want any company or any conversation. It’s something she wanted to do completely on her own.

It didn’t quite work out that way. While she’d have rather kept the whole thing quiet, Robyn needed money to buy the camels and supplies. She reluctantly approached National Geographic who saw potential in the story. They provided the cash and in return, Davidson agreed to write a feature article when it was all over. Further, a photographer would meet her at several checkpoints along the way to grab a few images.

It’s kind of ironic that what started out as a very private journey… has now become a tale that inspires so many. The article was a hit and Davidson became a media sensation. People wanted to meet her, speak to her. To answer all the questions and put the whole story to rest, she put pen to paper and in 1980, released the novel Tracks. It too became a hit and was read widely in Australian schools.

There’s been talk for decades about adapting the book for the big screen. In the early 1990s, a version was touted with Julia Roberts in the leading role! After numerous false starts, it finally fell in the hands of Oscar winning producer Emile Sherman (The King’s Speech) who enlisted an American director, John Curran (The Painted Veil), to turn the words into pictures.

Chosen to screen at the prestigious Venice and Toronto Film Festivals late last year, Tracks has now completed the festival circuit and is weaving its way into cinemas. Its first stop is here in Australian and it’s a nice touch that it’s been released on the same day as J.C. Chandor’s All Is Lost. Both films are low on dialogue and so you’ll have to watch and observe rather than listen.

I’m reminded of what 12 Years A Slave director Steve McQueen told me a few weeks ago – “What we say isn’t all that crucial. It’s what we do that provides the evidence”. It’s an apt way of describing Tracks. We don’t need a lot of narration from star Mia Wasikowska (Alice In Wonderland) to tell us how she feels and what’s she’s thinking. We can see it for ourselves through her great performance – mixing moments of toughness with moments of vulnerability.

The narrative is a touch sluggish, repetitive at times but there’s still a lot to like about Tracks. The best sequence in the film sees Davidson interact with an Indigenous elder (played by Roly Mintuma) who guides her through sacred lands. They don’t speak the same language but they quickly find a way of communicating.

Some will simply see this film as just “a thing that happened”. The hope is that others will connect with it a little more deeply. You’ll think about the rigidity that exists within today’s conformist world. Could you drop everything, ditch your smart phone and go on a year-long adventure? Would you come back a different person? Would you come back a better person? It’s at least worth the thought.