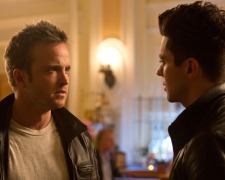 Three guys go drag racing through busy streets and on a crowded freeway. They drive into oncoming traffic. They cause accidents. They reach speeds of roughly 270 miles per hour. As they near the finish line, one of them intentionally clips the back wheel of his fellow competitor in front, trying to knock him out of the race. Yep, it works. The car spins, flips, falls off a bridge and then bursts into flames. Its occupant is killed instantly.

Who’s the bad guy in this situation? The guy who deliberately caused the accident? I don’t think there’s any question about that. The problem with Need For Speed is that it tries to portray everyone else as a “good guy”. It’s the wrong move. No moral compass was used in the making of this film. It’s a repugnant mess that tries to glorify a group of adrenalin junkies who love to endanger the lives of others.

The film’s “hero” is Tobey Marshall (Paul) – a top-notch mechanic from the small town of Mount Kisco, New York. He’s described as “Mr Strong and Silent” and it’s a fair description. Perhaps that’s just how he grew up. Perhaps he was inspired after watching Ryan Gosling in Drive.

Having been released from a two year stint in prison following the death of his good friend in the aforementioned street race, Tobey decides to prove to everyone that he’s learned nothing from the whole experience. He gets his hands on a multi-million dollar car (yeah, right) and then sets out on a cross-country trip to California for a lucrative invitation-only race. He’ll be accompanied by a car-loving female (Poots) to give the film some kind of romantic angle.

His motivation for breaking his parole and going on the trip can be summed up in one word – revenge. You see, Tobey was part of the street race… but it was the other guy, Dino Brewster (Cooper), who caused the crash that killed his friend. Dino didn’t serve any time behind bars though. Despite there being dozens of witnesses and a plethora of closed circuit television cameras, no one was able to place Dino at the crime scene. Not a good look for the incompetent police force in Mount Kisco.

Despite not having driven a car for two years, Tobey seems to have picked things up pretty quickly. He certainly hasn’t lost the art of jeopardising lives and evading the authorities. Helped by his enabling friends, one of whom owns a plane (fairly standard), they drive like maniacs from New York to California to get there in time for the big race.

It’s a shame this film has such moral issues because the driving sequences look great thanks to the work of director Scott Waugh (Act Of Valor) and cinematographer Shane Hurlbut (Terminator Salvation). They’ve found some picturesque shooting locations and they’ve extracted every last ounce of energy from the gifted stunt drivers.

That’s where I draw the line in terms of positives. The writers have framed this as a “good versus bad” story when it should have been a “bad versus bad story”. There’s a scene where Tobey is in desperate need of car and of all the people who could possibly assist… he is helped by the sister of his late friend. That’s right. He may as well have said – “look, sorry my stupidity contributed to the death of your brother… but do you know how I can get my hands on a fast car so I can risk even more lives?” Of course, such words are never said. That would be making Tobey look like a schmuck (and we can’t have that).

Need For Speed leaves a bad taste in the mouth… and it’s not from the over-salted popcorn.