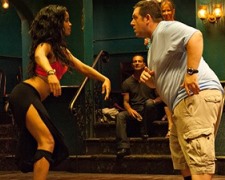 Nick Frost trained for 7 hours a day, 5 days a week, for 7 months. That’s how long it took for him to becoming a convincing salsa dancer. All the hard work was done at the renowned Pineapple Dance Studios in London – a place where top dancers perform with the hope of being spotted by dance companies, record labels, television networks and film studios.

Frost has admitted that he got a few strange looks and a few laughs from fellow dancers. Given his larger, not-so-athletic build, they clearly didn’t think he was Pineapple-material. It’s an interesting behind-the-scenes story that highlights exactly what Cuban Fury is trying to say.

Frost plays Bruce Garrett – a guy who was a champion salsa dancer in his teenage years but gave it away after being bullied, teased and beaten by some bigger high school students. Two decades have since passed and Bruce has decided to dust off his dancing shoes, team up with his old coach (McShane) and try to reignite his passion.

There’s an ulterior motive though. He’s not doing this solely to dispel the naysayers. Bruce wants to impress Julia (Jones) – a new employee at work who has a similar love for salsa. He doesn’t have the courage to ask Julia out on a date because it’d be like “a butterfly going out with a parsnip.” Instead, he’s going to build up his self-esteem by getting into shape and proving himself on the dance floor.

Making life extremely difficult is Drew (O’Dowd) – a villainous co-worker who is also looking to seduce Julia and is happy to squash Bruce is the process. Some may find his character over-the-top but he’s the key to the whole film. Because Chris O’Dowd (The Sapphires) has created such a vile, nasty, sleazy, disgusting, offensive individual… it makes us cheer for Bruce even harder.

This is a classic underdog tale. We’ve seen it before and we’ll see it again. It’s telling you not to bow to conformity, not to do what everyone else does. Sometimes you’ve just got to go out, take a chance and follow your dreams. We’ve seen kids’ films reiterate this message again and again – see Kung-Fu Panda, Cars and Turbo. Cuban Fury can be categorised as the adult equivalent.

We’ve grown accustomed to seeing Nick Frost in supporting roles (Kinky Boots, The Boat That Rocked) or working alongside good friend Simon Pegg (Shaun Of The Dead, Hot Fuzz). In Cuban Fury, he gets the chance to take the helm in what is a rare leading role. While it’s O’Dowd who steals much of the film, Frost proves himself a worthy protagonist and earns a few decent laughs.

This film’s weakness is the fact that it’s so unadventurous. Yes, there’s room for humour within the limited storyline but it’s not stretching beyond that. It’s a simple crowd pleaser – pure and simple. There are no surprises and everything pans out just as you might expect. This won’t be satisfying enough for some audience members… but I know a few who will find this sufficiently entertaining.

You can read my chat with star Nick Frost by clicking here.