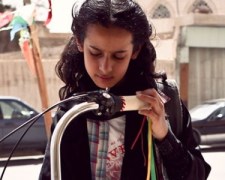 If you think it’s tough getting a film made here in Australia, try being a female director from Saudi Arabia. It’s a country that has no movie industry. You can’t walk down to your local multiplex because cinemas are banned. The only way to watch any kind of movie is on TV or DVD.

Further, Saudi Arabia is one of the worst countries when it comes to women’s rights. They are expected to wear a black cloak and head covering when they appear in public. They are not allowed to drive and are discouraged from using public transport. They must not interact with any men with whom they are not familiar.

Blending comedy with drama, Wadjda explores this inequality through the eyes of an 11-year-old girl (Mohammed) living with her mother (Abdullah) in the capital city of Riyadh. Wadjda is at age where she wants to rebel not just against her overbearing parents but also against her society’s rigid rules. She doesn’t like covering her hair. She doesn’t like taking orders from her school’s headmaster. She doesn’t like seeing her mother treated so poorly by her father (who is considering taking on a second wife).

There’s one thing she wants beyond anything else – a bike. Women generally aren’t allowed to ride a bike but Wadjda doesn’t care. She wants to race against a boy who lives across the street. With a bike already picked out from a nearby toy store, Wadjda’s only problem is coming up with the cash. An opportunity then presents itself. Her school is hosting a Qur’an recital competition with a substantial cash prize. It’s going to take a lot of study but she’s a very determined young girl…

This is a film to be admired for both its on-screen and off-screen story. Wadjda is reportedly the first film to have been shot entirely in Saudi Arabia. It adds a layer of authenticity (as you’d expect) but it also provides a great backdrop for cinematographer Lutz Reitemeier. There are numerous scenes where the focus is not on the characters but rather the intriguing setting. We look inside a standard Saudi home and observe the happenings out on the streets.

Director Haifaa Al-Mansour had to direct many of the film’s outdoor scenes from inside an equipped van. While there’s nothing to prohibit a female from making a movie, she couldn’t be seen giving orders to men in public. It only further underlines the film’s key theme. Through this simple, fictional tale, Al-Mansour has found plenty of room to highlight the oppression of women in Saudi Arabia. It will be an eye-opener for some.

Nominated for best foreign language film at the 2014 British Academy Awards (the first Saudi film to ever achieve such an honour), Wadjda one of the most important films that you will see this year.