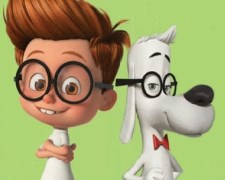 “And now here’s something we hope you’ll really like.” These were the memorable words uttered by a squirrel named Rocky in the 1960s animated television series The Rocky & Bullwinkle Show (noting that the show actually had several names). The 22 minute episodes contained a number of short stories – some revolved around Rocky and Bullwinkle (the talking moose) but others featured on a completely different set of characters.

Across the 5 seasons of the show, there were 91 stories that centred on a super-intelligent dog named Mr Peabody and his adopted human son, Sherman. They’d jump in their WABAC (pronounced “way-back”) machine to travel back in time and meet some of history’s most important individuals. The list included Napoleon Bonaparte, Calamity Jane, George Washington, William Shakespeare and Pocahontas.

Taking advantage of 3D computer-animated technology, the world of Mr Peabody and Sherman has been reinvigorated for the big screen by director Rob Minkoff (The Lion King, Stuart Little) and screenwriter Craig Wright (Six Feet Under, Lost). They use their time machine to visit to go on an assortment of misadventures to places stretching from Ancient Egypt in 1332 B.C. through to the French Revolution in 1793. It’s a creative way of giving kids a fun story while also providing a knowledge-building history lesson.

Holding the film together is an easy-to-follow narrative. Sherman and a new friend from school use the WABAC machine without Mr Peabody’s permission and their actions threaten to disrupt the “space-time continuum”. Further complicating the situation is Ms Grunion – a villainous child welfare officer looking for any excuse to take Sherman away from Mr Peabody. She doesn’t think it’s appropriate for a child to be raised by a dog.

I like the idea of this film and there are a few nice moments. There’s a sweet introductory sequence that makes effective use of the John Lennon song “Beautiful Boy (Darling Boy)”. There are also some cute perspectives on history – such as how Leonardo da Vicini got his model to smile before painting the Mona Lisa.

That said, I’m not fully sold on the film’s execution. Much of the time travel stuff is rushed with too much being squeezed into its 90 minute duration. I was also disappointed by the two leading characters – voiced by Ty Burrell (Modern Family) and 10-year-old Max Charles. When I think about some of my favourite animated features over the past year (Frozen, Cloudy With A Chance Of Meatballs 2, Despicable Me 2), I realise that Sherman and Mr Peabody don’t generate enough laughs – for both kids and adults. They’re not all that engaging either.

If you hang onto your money for an extra week, you’ll find a better animated feature on offer – The Lego Movie.