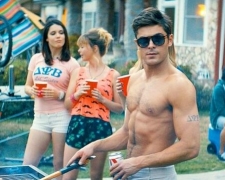 Entitled Bad Neighbours here in Australia (to avoid confusion with the long-running television show that no one watches any more), the film begins with a simple introduction of our characters. Mac (Efron) heads a rambunctious college fraternity that has just moved into a quiet street. Teddy (Rogen) and Kelly (Byrne) are his next door neighbours – an adventurous couple struggling to readjust their lives following the birth of their first son.

What follows is a two hour game of “an eye for an eye”. Mac throws a huge get-together with alcohol, drugs, women, and anything else you might expect. The only people not having a great time are Teddy and Kelly. They’re next door, lying in bed, and unable to get to sleep over the deafening party sounds.

There are a few unsuccessful attempts at civility but it’s time for the battlelines to be drawn. There’s no way these two households are going to be able to live a few metres apart. Teddy and Kelly will formulate a series of cunning plans to ensure the fraternity is kicked out. Mac and his buddies (which include Dave Franco and Christopher Mintz-Plasse) will retaliate in the hope that their neighbours will give up and find a new home in a new suburb.

You don’t need to pick a side here. You can just sit back and watch the absurdity of the situation. Directed by Nicholas Stoller (Forgetting Sarah Marshall, Get Him To Greek), Bad Neighbours is a raunchier-style comedy with plenty of laughs. The logistics of several jokes don’t make a lot of sense (such as scene where Mac breaks into Teddy’s work and installs an exploding air bag on his chair) but they’re funny anyway.

It’s been a good few weeks for Zac Efron. He picked up the MTV Movie Award for best shirtless performance (for That Awkward Moment). Now, he’s found himself a decent role (after a string of duds including The Paperboy, Parkland, The Lucky One, New Year’s Eve and Charlie St. Cloud). He injects his extroverted character with the right mix of likeability and arrogance. Perhaps it’s the start of his own Matthew McConaughey-style renaissance (minus the Oscar).

He’s not the only actor scoring points here. Seth Rogen and Rose Byrne (using her Australian accent for a change) share some great scenes together. This is evidenced by a lengthy exchange where they debate how to first tell the fraternity to “keep it down”. They want to get the message across… but they also want to find just the right tone so that they still sound like cool, friendly neighbours.

The story itself could have been a little tighter. I couldn’t work out if Teddy and Kelly were responsible parents or not. They want to stop the fraternity so their newborn son can get a good night’s sleep… but on the flipside, they give serious consideration to taking their baby to a late-night music concert.

With some cute pop culture references (the fraternity throw a Robert DeNiro party) and a few of well-time cameos (headlined by Lisa Kudrow), Bad Neighbours makes the occasional comedic stumble but thankfully, it has more than enough energy to make it to the finish line.