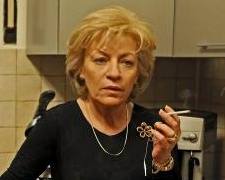 Child’s Pose is centred on a car accident. A young man, travelling down a freeway, changes lanes to overtake the car in front. His vision impaired by the other vehicle, he strikes a 14-year-old boy who was trying to run across the freeway. The boy is killed instantly.

Who’s to blame? Was the driver travelling at more than 140km/hr as suspected by the police? Did he have drugs or alcohol in his system? What about the driver of the car in front? Should he have slowed down to let the car behind overtake a little easier? Does the child bear some responsibility? Where were his parents? Why was he crossing a busy freeway?

Despite what you might think, this isn’t a “who did what” thriller. The camera’s attention isn’t focused on any of the abovementioned characters. Child’s Pose is told from the perspective of Cornelia (Gheorghiu) – the well-to-do mother of the car’s driver. She’s had a rocky relationship with her son for a number of years but is now trying to help him out in this time of need.

Cornelia is a tough character to get your head around… and that’s part of this film’s appeal. There’s a scene where her shaken son admits that he was driving 140km/hr, well above the speed limit, but she convinces him write down a significantly lower figure on his police statement. It’s her protective nature kicking in. She’s not concerned about guilt or innocence. She just wants to make sure, rightly or wrongly, her son stays out of jail.

That may sound rather sinister but how would you react in the same situation? What would you do if one of your children ran afoul of the law? How far would you go to support them? Cornelia implores with her son that pay his respects and attend the funeral of the deceased boy. Is her softer, compassionate side showing through? Or does she simply believe that showing empathy and attending the funeral will help her son’s chances if charges are laid?

Shot in Romania, Child’s Pose picked up the Golden Bear for the best feature in competition at the 2013 Berlin Film Festival. Luminita Gheorghiu (who I’d never heard of before) delivers a superb performance that earned her a nod for best actress at the 2013 European Film Awards – losing to Veerle Baetens in The Broken Circle Breakdown (which coincidentally is also released in Australia this week).

Exploring morality and forgiveness, mixed with a curious family dynamic, Child’s Pose is an involving piece of cinema.