Review: A Million Ways To Die In The West 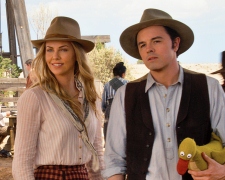 I’ve generally been a fan of Seth MacFarlane.  Family Guy has become an iconic animated series which is now in its 12th season (although I admit that the earlier episodes are best).  The film Ted had some terrific one-liners and it’s easy to see why it grossed more than $500m at the international box-office.  He wasn’t the greatest Oscars host in 2013 (it’s always a tough gig) but a few of his jokes/barbs did hit the mark.

As for A Million Ways To Die In The West… it’s disappointing.  You’d think that you’d have plenty of room for good humour when trying to spoof the western genre, but MacFarlane falls back on the same childish material again and again.  Did we need 4 fart jokes in the opening 30 minutes?  Did we need another lengthy “character has chronic diarrhoea” scene?

I’m not against vulgar, politically incorrect comedies.  There’s Something About Mary and American Pie showed that you can use this style of humour effectively.  These films didn’t win the public over with simple fart jokes.  They created original gross-out moments that caught audiences off guard (testicles stuck in a zipper, a penis in pie) while also providing characters, as silly as they may be, who we can connect with.

Herein lies the biggest problem with A Million Ways To Die In The West.  Despite his best efforts, Seth MacFarlane cannot carry this film on his own.  There are lengthy set pieces where he’s trying to mock the western genre (such as the opening shoot out) but it feels more like a stand-up comedy routine.  The story is superfluous.  It doesn’t have the same wit and sophistication as what Mike Meyers was able to achieve with the Austin Powers franchise.

The thin premise sees Albert (MacFarlane) try to win back the heart of his long-time love interest, Louise (Seyfried).  How can I best describe Albert?  He’s like a not-so-funny version of Larry David.  He can’t keep his mouth shut, he overanalyses situations, and he does his best to offend every race and every religion.  It’s not hard to see why Louise dumped him and shacked up with the wealthy owner of the local “moustachery” (Harris).  I’d have done the same.

Helping Albert win back Louise’s affections will be a beautiful woman (Theron) who has arrived in town with her shabby-looking brother.  That is until a villainous, well-armed outlaw (Neeson) enters the picture.  It’s then time to cue the big action finale.

MacFarlane doesn’t ask much of his supporting cast.  They can hardly get a word in.  Sarah Silverman plays a popular prostitute and Giovanni Ribisi plays her boyfriend.  The running gag throughout the film is that she won’t sleep with him, despite the fact it’s what she does for a living.  It got a laugh out of me the first time but when you see the joke continually repeated throughout the film, you realise their characters have been wasted.  So too was my two hours.