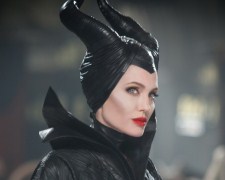 Once upon a time (yes, the film does use that line), there were two kingdoms.  One was filled with sad humans who were governed by a controlling king.  The other was filled with an assortment of friendly creatures who lived happily side by side.  They didn’t require a leader… but they were guided by a powerful fairly named Maleficent (Jolie).  She helped protect them from the nasty king who was looking to invade and steal their precious jewels.

Maleficent is strong, formidable.  Her array of magic powers can get her out of any situation.  Everyone has a weakness though and for Maleficent, it’s a human by the name of Stefan (Copley).  They first met as children when he snuck into her lands in search of treasure.  They grew up and became quite close.  Could their friendship finally unite the two kingdoms?

Um, no.  Stefan grew up and betrayed Maleficent.  He slipped her a roofie, stole her wings and returned to his own people as the new king.  The treacherous humans had proved themselves dominant once again.  Suffice to say that Maleficent didn’t take this too well.  Stripped of her ability to fly, she closed her heart and became a very dark individual.  Her fellow creatures no longer looked up at her with a wide smile.  They now lived in fear of her.

Given her magic powers, you’d think she’d just rock up at King Stefan’s castle and kill him, right?  If that were the case, this film would be over inside of 30 minutes.  Instead, Maleficent comes up with a much, much, much more convoluted plan.  She places a curse on the King’s infant child, Aurora, and proclaims that when she turns 16, she will be pricked by the needle of spinning wheel (very specific), fall into a deep sleep, and will only be awoken by “true love’s kiss”.  Oh yeah, and the spell is irreversible.  No correspondence will be entered into.

It’s a story that takes a long time to set up and get going.  It’s not until the film’s second half that we finally get to meet the 15-year-old Aurora (Fanning) and work out how she will escape this predicament.  I don’t want to give much more away because that’s really all there is to the screenplay.  It’s a rather shallow tale where characters go through rushed personality changes.

Some elements made no sense to me.  Given Stefan’s hatred for the other kingdom, why the hell was he letting his daughter be raised by three incompetent fairies in a remote hideaway?  Surely she’d have been safer with the castle walls?  As for Maleficent, why did she stalk Aurora throughout her whole upbringing?  Was it a curiosity thing?  Did she not have better things to do?

I’m drawn to compare Maleficent with last year’s Oz The Great & Powerful.  Both films feature strong production values but they’re lacking when it comes to interesting characters and engaging storylines.  It may be based on the much loved 1959 Disney classic Sleeping Beauty but I don’t believe audiences (and I’m taking about kids and adults), will find this as memorable.