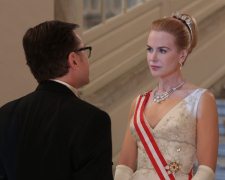 Grace Of Monaco has been kicked, slapped, and dragged through the mud en route to cinemas across the globe.  It was scheduled to be released last November, just in time for Oscar season, but French director Olivier Dahan (La Vie en Rose) and influential American producer Hervey Weinstein (who owned the U.S. distribution rights) couldn’t agree on a final version of the film.

Dahan went public with his frustrations and described Weinstein’s version of the film as “a pile of shit” in an article for a French newspaper.  It was a risky move.  Dahan knew it might generate some sympathy towards his cause (since all of Hollywood knows about Weinstein and his meddling ways) but at the same time, it would ring alarm bells and generate negative publicity.

In the end, an agreement was reached.  Dahan gave up some of his directorial fee in return for full control over the finished product.  There’s no happy ending here though.  The film was trashed by critics when it opened the Cannes Film Festival last month.  Laughs were heard during its first press screening (it’s not a comedy).  Adding fuel to the fire were the Monaco royal family who refused to attend the premiere stating that the story had been “misappropriated for purely commercial purposes.”

It’s a shame because there’s merit in pulling back the curtain and looking into the life of Grace Kelly.  This was a woman who in 1956 was “on the up and up” in terms of her acting career.  She’d chalked up two consecutive Oscar nominations (winning for The Country Girl) and had partnered with prolific director Alfred Hitchcock to make such hits as Rear Window, Dial M For Murder and To Catch A Thief.  For those needing a modern day comparison, I’d describe her as the Jennifer Lawrence of the 1950s.

Then, at the age of just 26, Kelly gave it all away.  She moved to Monaco, married Prince Rainier III, and raised three children.  Never again did she appear on the big screen.  I’m not knocking her decision… but it’s one that raises questions.  If you loved your career, would you give it all up for someone you’d only just met?  Would you have any regrets?  Couldn’t you try to find a way of juggling both work and family?

Dahan’s film, based on a screenplay by Arash Amel, offers a disclaimer right from the get-go.  In bold red letters, we are told this is “a fictional account inspired by real events”.  Dahan never intended the film to be a historical, real-life drama.  Rather, he wanted to use the Grace Kelly’s broad story to highlight the difficulty in finding a balance between her husband, her kids and her career.  For that reason, he freely acknowledges that some plot developments have been embellished.

It’s a questionable approach.  I can’t help but think Dahan should have used a clean slate and crafted a completely fictitious tale.  Instead, we’ve left with a film that doesn’t really know what it wants to be.  It’s a muddled stew of politics, conspiracies, romance, family values and fairy tales.  Oh, and let’s not forget the bizarre montage of “princess lessons” featuring Derek Jacobi.

Some elements are quite interesting (such as the tension between France and Monaco in 1962) but like so much of the film, it’s all oversimplified.  It leaves a lingering doubt as to how far the truth has been stretched.  It all feels too pro Grace Kelly, too anti everyone else.  Prince Rainier comes across as an incompetent fool.

Life isn’t easy being princess.  Both Grace Of Monaco and last year’s Diana make that point very clear.  Life’s not easy being a director either.  Olivier Dahan now knows that all too well.