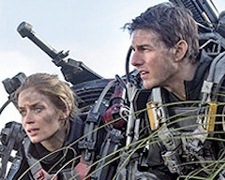 “Now that’s an action movie.”  I believe these were the first words I uttered (excluding an expletive) as the credits started to roll after Edge Of Tomorrow.  It’s comfortably one of the best films of 2014 and I can’t wait to sit back, relax and enjoy it all over again… but first, I have a difficult task to complete.  I need to articulate my thoughts.  I need to explain why this film reinvigorated my love for cinema.  Most importantly, I need to convince you to see it (without overhyping).

Let’s start with the film’s ingenious premise.  It’s an analogy that almost everyone will use but it’s appropriate to describe this film as a science-fiction version of Groundhog Day.  Tom Cruise plays Cage – a cowardly soldier who is thrown into the front line as part of a last ditched effort to save the planet from an alien invasion.

He doesn’t stand a chance.  The aliens are smart, fast, and agile (they’re really freaky too).  Cage is killed within a matter of minutes.  So too are his fellow soldiers.  Game over.  The war is lost.  Well, not quite actually.  Cage isn’t greeted by a friendly angel at the Pearly Gates.  Instead, he wakes up in the exact location where he was 24 hours earlier – on a military base and about to be introduced to his no-nonsense Master Sergeant (Paxton).

So how is this possible?  It turns out that Cage miraculously killed one of the rarer alien creatures, known as an Alpha, just before he met his own demise.  It was all luck and no skill.  However, it exposed the single reason why the aliens have been so dominate – Alphas had discovered the ability to travel back in time.  If a battle didn’t go to plan, the aliens simply reset the day and started again.  They could keep doing this until they won.

The catch is that by defeating the Alpha, the power has now switched to Cage.  It’s a really cool concept once you get your head around it.  Cage’s life is now the equivalent of a video game.  If he is killed, he simply gets to start again from the beginning… only this time, he’s a little smarter and has a little more information about his enemy.  Guided by gutsy soldier (Blunt), Cage goes in search of the end prize – the weakness that can defeat the aliens.  There’s no rush though.  He’s got plenty of time and plenty of lives.

There have been plenty of great actions films in recent years (the Batman trilogy, most of the Marvel stuff) but Edge Of Tomorrow still feels like a breath of fresh air.  Instead of following a hero who seemingly cannot be killed, we’re cheering for a hero who keeps getting killed again and again!  It an idea that provides plenty of laughs (the movie has a great sense of humour) and also much food for thought.  You’ll need to put yourself in Cage’s head and think about how best to solve this riddle.

The film moves at a cracking pace thanks to the skills of director Doug Liman (Go, The Bourne Identity) and editor James Herbert (Sherlock Holmes).  The story may sound repetitive but it’s anything but.  There are many different scenarios – some where Cage is experiencing a dilemma for the first time, and others where he is clearly familiar with the surroundings and just wants to have fun pre-empting the aliens’ moves.  There are also unexpected moments of tension.  A scene in a quiet hospital bed proves that you don’t always need guns and explosions to create anxiety.

Quite a few folk were involved with the screenplay but the final credit has gone to Christopher McQuarrie (The Usual Suspects) and the Butterworth brothers (Fair Game).  They have taken the 2004 novel from Japanese science-fiction writer Hiroshi Sakurazaka and created a gripping adventure.  The film doesn’t waste time with long-winded introductions and unnecessary side plots.  It will hold your attention for the full two hours.

If I can offer one final selling point, let me go with Tom Cruise.  If you’re a fan, you’ll like this.  He’s still a likeable action hero with an uncanny knack for picking great roles.  He’s also looking pretty good for a 51-year-old.  If you’re not fan, it’s still perfect for you.  You can watch him get killed every few minutes!  Everyone’s a winner.