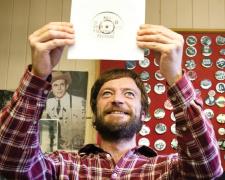 Good Vibrations tells the real life story of Terri Hooley – a music lover who opened a record store in Belfast in the mid-1970s and helped grow the local punk rock scene.  There’s an early scene where he’s been looked at quizzically by his bank manager who cannot understand why he’d want to open a business in downtown Belfast given the political climate.  This was a time when there was huge conflict between Catholics and Protestants.  People didn’t even feel safe walking down a busy street.

What resonates most with this film is the passion shown by Terri (played in the film by Richard Dormer).  He saw himself as just an ordinary guy doing what he loves… but his enthusiasm for his work and the music industry is something that you don’t see all that often.  It’s inspiring stuff.

At first he just sold records but Terri’s activities expanded when he befriended some young musicians from Northern Ireland who had some great songs.  They just didn’t know how to find an audience.  Terri had zero experience when it came to music production but he helped them record an album and helped get them heard on radio and seen on television.  He didn’t even charge a fee.

There was a cost to all of this though.  Terri put so much time and effort into his work that it put a huge strain on his relationship with his wife, Ruth (Whittaker).  Terri was spending more and more nights away from home.  He was getting himself into more and more debt with the record shop.  There was now a growing likelihood that the bank would take possession of their home.

The film does most things by the book but it’s still an interesting biopic about a person that you probably won’t be familiar with.  It inspired me to do a little more reading about Terri Hooley on leaving the theatre.  I was also curious to know more about Richard Dormer who is fantastic in the leading role.  The Belfast-born actor started out in the theatre where he was not just an actor but also a playwright.  He’s had a few small supporting roles in feature films but this is first chance at something big.  He grabs the opportunity with both hands and you’re likely to remember his performance for some time.

I also like the approach of directors Lisa Barros D’sa and Glenn Leyburn who have included actual footage from the conflict in Northern Ireland in the 1970s.  It isn’t overdone and it helps give the film some context.  When you see the aftermath of an explosion that killed an Irish band who were travelling home to Dublin, you get a true understanding of the risks that Terri and his friends were taking when they were on their own mini-tours across the country.

Good Vibrations first screened over 2 years ago in Northern Ireland and so it’s taken a rather long journey to reach us here in Australia.  Don’t let that perturb you though.  It’s a film worth seeing.