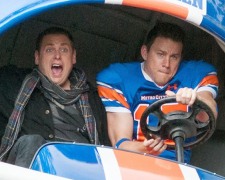 22 Jump Street has two things in mind.  Firstly, it wants to poke fun at the sequel genre.  In the film’s opening scene, we are reintroduced to police detectives Schmidt (Hill) and Jenko (Tatum).  They’ve earned a promotion and are now trying to bust a heavyweight criminal (Stormare).  Things are a lot more serious and it would appear that the film’s writers want to let these characters evolve and move in a different direction.

Wrong.  When their assignment goes pear shaped, they are informed by their boss (Ice Cube) that they’re clearly not ready for extra responsibility.  They need to go back to what they’re familiar with.  He’s going to put them on a new case that will require them to go undercover, pretend they’re college students, and figure out who is behind a major drug dealing operation.  In other words, it’s the exact same premise of the original film (except for the fact that they’re in college as opposed to a school).

It’s the first of many references to the predictable nature of sequels and their reluctance to take chances.  The concept is continued all the way through to the closing credits where we’re given a glimpse of future instalments may look like if they stick with the same formula and milk it for all it’s worth.

The film’s second major theme is its mocking of the homoerotic nature of so many buddy comedies.  It’s filled with double-entendres.  Jonah Hill and Channing Tatum are supposed to be professional police officers but you’d think they were long-time lovers when you hear the way they speak.  Things get even stranger when Tatum befriends one of the high-profile players on the college football team.  It leaves Hill’s character rather jealous.

22 Jump Street opened strongly at the U.S. box-office last week and is getting the thumbs up from most critics.  It’s easy to see why.  This is a film that is creative enough… to mock its own lack of creativity.  It’s designed for filmgoers (myself included) who groan about the increasing number of sequels, reboots and remakes.

That said, I’m not fully convinced on the execution of this idea.  Some jokes hit the mark while others fall flat.  There’s also a problem with repetition.  The homoerotic banter between Hill and Tatum is funny the first time but it gets tired in the later stages.  You kind of hope that it might lead to a surprising punch line (e.g. they are actually gay) but that sadly doesn’t eventuate.

Despite its flaws and drawn out running time (almost two hours), 22 Jump Street is an easy-to-enjoy comedy.