Review: The Two Faces Of January 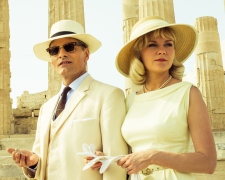 A question I’m often asked – what’s an example of a film that was just as good, if not better, than the novel on which it was based?  I could come up with a few examples but one that’s permanently stuck in my mind is The Talented Mr Ripley.  Directed by the late Anthony Minghella and released back in 1999, it was a brilliant thriller about a sinister individual (Matt Damon) who stole the life of someone else.

I make reference to this fact as The Two Faces Of January is based on a novel from the same author, Patricia Highsmith, and has been brought to the screen by an Oscar nominated writer, Hossein Amini (The Wings Of The Dove, Drive).  It doesn’t delve into its characters quite as deeply as in Ripley, but it’s still an intriguing mystery that feels a lot more realistic that what we’re used to from Hollywood.

The story is set in Greece 1962 and begins by introducing us to Rydal (Isaac) – a young American who makes a meagre living as a tour guide.  An economics graduate from Yale University, Rydal could easily slip on a suit and make more money back home… but he’s not interested.  He’s escaped from his overbearing father and he’s content with the new, independent life that he’s crafted for himself.

At a small café in Athens, he befriends two Americans, Chester (Mortensen) and Colette (Dunst), looking for a guided tour.  He learns that they too are trying to hide from their past.  Chester is a World War II veteran who once ran a successful brokerage firm.  He and his wife were forced to flee the country after he lost the money of several influential clients.

A single event will forever change their lives.  Chester is confronted in his hotel room by an armed goon seeking money on behalf of his begrudged clients.  They fight and the goon accidentally hits his head on the bathroom tiles.  He is killed instantly.  It’s a clear case of self-defence but Chester realises that counts for nought.  He can’t afford for the authorities to become involved as it will expose his own dodgy past.  Dragged into the mess is Rydal who unwillingly finds himself hiding the body.

What follows is a seductive tale that will leave you wondering about everyone’s motivations.  Is Chester a genuine guy going through a rough patch… or is he a cunning, devious character who thinks only of himself?  Is Rydal helping because he’s sympathetic towards their plight… or is a shallow man looking to make some cash and sleep with a beautiful woman?  What about Colette?  Is she loyal to her husband… or is she thinking about getting out while she still can?

The answers to these questions aren’t exactly clear cut which is part of the charm of The Two Faces Of January.  We’ve all got a bit of good in us.  We’ve all got a bit of bad in us.  That comes through loud and clear when you get to know these characters.  Viggo Mortensen, Oscar Isaac and Kirsten Dunst have all been well cast.  You’re also likely to be wooed by the location.  Shot in both Athens and Crete, it’ll edge you a few steps closer to dusting off the passport and heading that way (if you haven’t already).