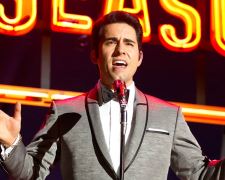 Based on the Tony Award winning musical that has been performed across the globe, Jersey Boys chronicles the life of the iconic pop band, the Four Seasons.  It begins in 1951 when Frankie Valli (Young) was a just young guy working in a barber shop in New Jersey.  He knew there were only three ways to get out of town – join the Army, join the mob or get famous.

Valli decided to go with options 2 and 3.  He befriended a mob boss (Walken) and teamed up with good friend Tommy DeVito (Piazza) to start a small band.  It was nothing big at first.  They simply performed in front of a few dozen people in small clubs.  It wasn’t until 10 years later and the arrival of a talented singer-songwriter named Bob Gaudio (Bergen), that the doors finally burst open.

Over a ridiculously fruitful 5-year stretch, they recorded a string of hits including “Sherry”, “Big Girls Don’t Cry”, “Walk Like A Man”, “Rag Doll” and “Bye, Bye, Baby”.  However, that’s not the reason why their story has been adapted for the big screen.  There were a string of bands in that era (headlined by The Beatles) who were equally, if not more, successful.

What makes the tale of The Four Seasons so compelling are the numerous backstories.  Frankie struggled to come to grips with his overnight stardom and his family life back in New Jersey took a back seat.  Tommy battled a huge gambling addiction and became indebted to the mob.  Bob wanted to step away from the stage and devote himself solely to song writing.  The more successful they became, the harder it was to stick together.

I’ve been fortunate enough to see the stage show on two occasions – on London’s West End back in 2010 and here in Brisbane in 2012.  It’s immensely entertaining – devoting just the right amount of time between the dialogue-driven narrative and their ever popular music.  I can still remember the crowd in London.  Old women were on their feet and joyously signing along to the final song “Oh, What A Night”.

This cinematic version, directed by 84-year-old Clint Eastwood, isn’t quite as engaging.  For starters, I don’t really know if it can be classed as a “musical”.  Writers Marshall Brickman and Rick Elice, who were also responsible for the stage show, have trimmed the songs to go with something more dramatic, more dialogue-heavy.  It’s not the right approach.  The film culminates with a huge musical number (during the closing credits) and my first thought was – “that’s what that whole film should have been like.”

Despite the lack of pizzazz, the terrific performances from the cast give the film a much needed boost.  Vincent Piazza (Rocket Science) is sensational as Tommy DeVito – the band’s controlling leader who slowly starts to lose his grip.  John Lloyd Young is also superb… but that’s to be expected.  He played Valli in the original Broadway show back in 2005 and won a Tony Award for his efforts.  The most recognisable name amongst the cast is Christopher Walken who has fun with his role as a powerful mobster.

I’d always take the live stage show if given a choice but if you’re a fan of The Four Seasons, there’s probably nothing I can say that’ll stop you from seeing this.  You’ll like it too.