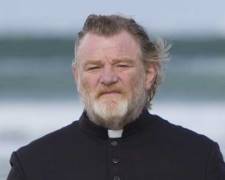 Father James (Gleeson) opens the confessional window.  On the other side is an unknown man who reveals that he was repeatedly molested by a priest, when he was just 7 years old.  Father James asks what he can do to help but the man isn’t interested in suggestions.  While the priest involved has since passed away, this man is looking to send a very strong message to the Catholic Church.  He reveals that he intends to kill Father James in one week’s time.  He’s only providing advance notice so that Father James can get his affairs in order.

It’s an explosive opening scene.  This all takes place before the opening titles have had their chance to impress.  If that was all I told you though, you may expect this to be some kind of “whodunit” thriller.  Trust me, it’s not.  Father James isn’t trying to track down the identity of the soon-to-be assassin.  While it’s not revealed to the audience, he knows exactly who it is.

So what is this film about then?  In essence, we follow Father James as he interacts with an assortment of folk in his small Irish town.  It’s a rather odd place.  Everyone acts like they’re hiding something.  They also seem intent on putting Father James to the test.  They bombard him with questions about God and hope that he’ll slip up and say the wrong thing.  He’s too good for that though.  He’s a sharp, experienced individual who knows when to answer… and when to not.

Over the course of the week, he tries to make peace with his middle-aged daughter (Reilly), who he knows he hasn’t spent enough time with.  He administers the last rights to a French man on the verge of death after a terrible car accident.  He talks to an unrepentant prisoner serving a life sentence for a series of murders.  He investigates a domestic disturbance that has left one of his parishioners with a black eye.

This may sound a contradiction but Calvary is a wonderfully uncomfortable film.  Despite the heavy subject matter, there are clearly moments where writer-director John Michael McDonough is looking for laughs.  This is a black comedy with heavy emphasis on the word “black”.  There some moments during my preview screening that were greeted with a mix of stunned silence and shocked laughter.

McDonough was response for one of my top 10 films of 2011 – The Guard.  It too starred Brendan Gleeson and was the comedic tale of a disenchanted Irish police officer forced to team up with an American FBI agent to solve a murder.  This isn’t quite on the same level but it’s still a very good thought provoker.  You’ll have to work hard to get inside the head of each character.  I’m keen to see it again.