Review: Dawn Of The Planet Of The Apes 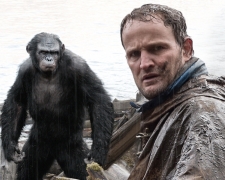 Dawn Of The Planet Of The Apes picks up ten “winters” after the 2011 reboot.  Human society has collapsed.  A man-made virus wiped out half the planet and for the remainder, it’s summed up best by a television interviewee – “those not killed by the virus will be killed by the fighting.”  Governments have been shut down and martial law has been declared in 28 countries.

As for the super-intelligent apes, they’ve fared much better.  They’ve forged their own civilisation in a secluded forest just outside of San Francisco.  They can hunt, ride horses, make weapons and build shelter.  They have even come up with a simple set of laws by which they can live.  First and foremost, apes cannot kill other apes.

While they’d prefer to steer clear, the apes soon find themselves thrust back into the human world.  A small pocket of survivors, who were genetically immune to the virus, have made a new home for themselves amongst the overgrown ruins of San Francisco.

In search of an energy source, the humans are looking to restart an electricity-generating dam which just so happens to be close to the apes’ home.  We get to see things from both perspectives.  The leader of the apes, Caesar (Serkis), wants to trust the humans and allow them to operate the dam… but some of his offsiders believe that they’re up to no good.  The humans also have division within the ranks.  Some want to negotiate… but others want to use their military strength to obliterate the apes before they become too strong.

I wasn’t a huge fan of the original reboot but Dawn Of The Planet Of The Apes reeled me in quickly and held me right through to the action finale.  I was surprised at how political it was (don’t let that be a turn off).  It’s not a simple ape versus human storyline.  On both sides, there’s intense debate about the best course of action and the answers aren’t always that clear.

You’d be hard pressed to find another film so far in 2014 that asks more of the special effects artists.  The visuals were created by Weta Digital (the same company behind The Lord Of The Rings movies) and the apes could not look more real, more realistic.  When you look closely at the wet fur and their bloody scratches, you’ll see the ridiculous attention to detail.  The background images also deserve attention.  The ruined streets and buildings of San Francisco are both eerie and beautiful.

The focus of this film is on the apes (that’s obvious right from the start) but I still a little disappointed with the way the humans disappeared from the story in the final half hour.  It doesn’t make a lot of sense and it’s my only qualm in what is one of the year’s strongest, most thought-provoking action releases.  Director Matt Reeves (Cloverfield) deserves a big wrap.