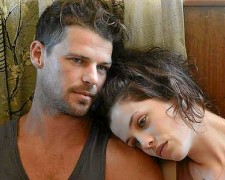 If you’re a filmmaking without deep pockets, you have to take a different approach to this genre.  You can’t rely on state-of-the-art visuals that involve gigantic tidal waves or menacing alien spaceships.  You need to take a more minimalist approach and create tension through other means (a great script helps too).  Recent examples include 28 Days Later, The Road, Melancholia and Shaun Of The Dead (to add a splash of comedy).

Writer-director Zak Hilditch, working off a tiny budget for what is his first feature film, has tried to put his own spin on the genre.  These Final Hours begins with a very quick overview.  An asteroid has landed deep in the northern hemisphere and created a wall of fire and lava that will soon engulf the entire planet.  There’s no superhero to save the day.  There’s no miracle on the horizon.  This is the end – pure and simple.

Hilditch could have focused the film on a range of different of characters but instead, he has chosen just one.  James (Phillips) is an ordinary guy living in Perth.  He drinks.  He does drugs.  He cheats on his girlfriend.  He neglects his mother.  He takes very little responsibility.  It’s clear that the most important person in James’s life is himself.

James knows that he has 12 hours until the apocalypse reaches the Perth shoreline.  Instead of worrying about how to survive, These Final Hours asks an interesting question – what would you do in this same scenario?  If you had just a few hours left to live, how would you spend the time?  Would you spend it in the company of family?  Would you host an “end of the world” party?  Would you commit suicide so as to avoid the pending horror?

In James’s case, he has found himself at a moral crossroads.  He planned on spending his final day at a drug-fuelled party hosted by his girlfriend (Beck) and her brother (Henshall).  Instead, he’s stumbled across a young girl (Rice) who has been separated from her father and is pleading for help.  Should he think of himself and go to the party?  Or, just this once, should he think of someone else and assist the scared girl?

It’s a grim premise but some might be surprised at how just dark this film is.  It doesn’t shy away from the gravity of the situation.  There’s a scene in which James walks into a library and finds a couple with two kids who are about to kill themselves.  The violence is also quite confronting it’s no surprise to see the movie receive an MA rating.

Nathan Phillips (Snakes On A Plane) gives a passionate performance in the leading role.  Also impressive is Angourie Rice who was just 12 years of age at the time this film was shot two years ago.  The cast is rounded out by some memorable cameos from the likes of Daniel Henshall (Snowtown) and Sarah Snook (Not Suitable For Children).

The lack of budget provides a few credibility issues.  I thought for sure there’d be more carnage on the roads and more people out on the streets.  A few too many residents appear to have “checked out” early and the suburban streets of Perth resemble a ghost town.  I’m not sure it adds up.  That said, I like the concept and it’s nice to watch an apocalyptic action film that asks a few questions.

You can read my chat with star Nathan Phillips by clicking here.