Review: Guardians Of The Galaxy 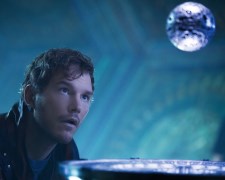 They’re not hard up for dollar buy Guardians Of The Galaxy was always going to be an important film for Marvel Studios.  For starters, it’s a film that introduces a bunch of new world-saving characters.  This is in contrast to the nine previous Marvel film that were all centred around the same individuals – Iron Man, Thor, Captain America and The Hulk.

Secondly, and perhaps more importantly, it’s a film that isn’t relying on renowned Hollywood actors.  There’s no Robert Downey Jr, Samuel L. Jackson, Chris Evans, Natalie Portman or Scarlett Johansson.  Guardians Of The Galaxy is headlined by Chris Pratt – a 35-year-old who has forged a career out of supporting performances.  His only two lead roles have been in Deep In The Valley (a 2009 romantic comedy with Kim Kardashian) and The Lego Movie (the popular 2014 animated feature where only his voice was required).

It’s curiously ironic that the two biggest names in Guardians Of The Galaxy are never seen.  Vin Diesel plays a walking, talking, fighting tree who says the same three words throughout the whole movie – “I Am Groot”.  Bradley Cooper is almost unrecognisable as the voice of a genetically engineered raccoon with a fierce, no-nonsense attitude.

Another notable point of differentiation is the fact that this is the film Marvel script to be written by a woman.  Nicole Perlman spent two years sifting through Guardians comics and crafted a story that would befit a two-hour adventure for the big-screen.  While director James Gunn (Dawn Of The Dead) claims that he re-wrote most of the script, the bottom line is that both their names appear in the credits and a small piece of history has therefore been made.  It’s a small step in changing what is a very male-dominated industry.

Given the above mentioned “risks” (for use of a better word), there were questions about whether this film could still put bums on seats.  The public provided the answer to all of those questions last weekend.  Guardians Of The Galaxy made a staggering $94m at the U.S. box-office over its first three days – the third biggest opening of 2014 behind Transformers: Age Of Extinction and Captain America: The Winter Soldier.  Expect sequels… and lots of them.

The premise takes a little while to get your head around but once you understand everyone’s motives, things will click.  Five incredibly different creatures unwillingly find themselves teaming up to prevent a world-destroying orb from falling into the wrong hands.  That’s it in a single sentence.

Guardians Of The Galaxy is at its best when it’s trying to be funny.  You could almost describe as a spoof in places!  It makes great use of its 1960s/70s soundtrack (that will appeal to older audiences) and there are plenty of pop culture references (Kevin Bacon the most notable).  Not everything works through.  The dramatic elements don’t particularly resonate, the villains aren’t anything special, and the script feels too “busy”.  It’s trying to squish too much into the two hour running time.

If asked for a 4-word review, I’d use an old adage and label the film as “good but not great”.  That would seem to contrast the majority view on social media who are using every superlative adjective they can think of.  Guardians Of The Galaxy will be popular and it will make a lot of cash… but I think it’s far from Marvel’s best.