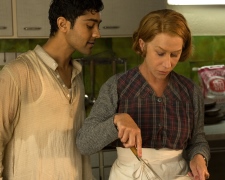 Produced by Oprah Winfrey and Steven Spielberg, The Hundred-Foot Journey is working very, very, very hard in its efforts to be a crowd pleaser.  Those who’ve read the 2010 novel from Richard C. Morais will probably know this anyway.  It’s been adapted for the screen by Oscar-nominated writer Steven Knight (Dirty Pretty Things) and directed by the Swedish-born Lasse Hallström (My Life As A Dog, The Cider House Rules).

As the film begins, we find the Kadam family is desperately looking for a change of luck.  They left their home in India after it was torched during a period of deep political unrest.  They tried to make a go of it in London but couldn’t find a way to make a decent living.  Now, they’ve found their way to a small French town where they’ve used their life-savings to buy a dilapidated restaurant.  They hope to transform it into something magical – introducing the French residents to their renowned curries and spices.

Their biggest competitor… lives directly across the street.  Madame Mallory (Mirren) is a widower with no children.  She has poured her entire existence into creating “the best restaurant for 50 miles”.  Her regular customer list includes the President of France and she works her staff very hard.  Her current goal is to increase the restaurant’s notoriety by earning a second Michelin star (to go with the one she’s held for many years).

I like food.  I like movies about food.  Lasse Hallström does exactly what you might expect with such a screenplay and takes us inside the kitchens of both restaurants.  We see the chefs in action and see tight close-ups of their signature dishes.  Both are doing their best to create succulent, mouth-watering delights… but the method, the presentation, the ambience, the music… it’s all quite different.

I haven’t read Morais’ novel but there are many elements to this film that feel unexplained.  For starters, there never appears to be anyone in the Indian restaurant!  We see a few on the opening night when the father, Papa (Puri), drags in a few customers off the street but that’s about it.  How are they making any money?  There’s also a bizarre moment of tension when the restaurant is attacked by racist thugs.  It’s an odd sequence because it appears out of nowhere and is resolved far too quickly/easily.

The film’s best subplot is the relationship that develops between father and son.  Papa realises his son, Hassan (Dayal), has huge potential as a chef but it leaves him at a crossroads.  Should he pushing his son away and telling him to go out and find his place in the kitchen of a world-class restaurant?  Or should he be pulling him back and asking him to stay with the family – realising that his son is critical to his own Indian restaurant’s success?

The romantic stuff doesn’t really work.  Hassan strikes up a relationship with a young French chef from the competing restaurant and their on-again, off-again banter is tiring.  One minute she’s helping him become a better cook.  The next minute she’s jealous of his success.  By moving so quickly between these scenes, the sudden character transformations are difficult to believe.  There’s also another couple who end up getting romantic (no surprises who) and that too feels forced.

With a muddling pace – the introduction is slow, the middle section is rushed, and the conclusion is drawn out – The Hundred-Foot Journey is a film that’s screaming out “FEEL GOOD! FEEL GOOD!” but it needed to do a lot more to convince me.