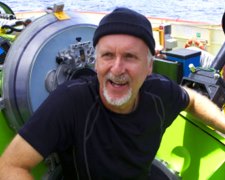 James Cameron is a ridiculously successful filmmaker.  Think Terminator, Aliens, The Abyss and True Lies.  In 1997, he created the highest grossing motion picture of all time – Titanic pulled in more than $600m at the U.S. box-office and took home 11 Academy Awards.  Only one film since has made more money and amazingly enough, it was Cameron’s next feature, Avatar.  Sequels are currently in pre-production.

So what did he do with all his cash?  Well, I’m sure he bought himself a nice house and a few other bright shiny things… but as we see in this documentary, James Cameron is about more than just movies.  He’s an explorer who is fascinated by our planet’s oceans – the part that covers 71% of the Earth’s surface and yet remains such a mystery (evidenced by the recent disappearance of Malaysian Airlines Flight 370).

Deepsea Challenge is a documentary that follows Cameron’s attempts to build a submersible and travel to the deepest part of our ocean, the Mariana Trench.  Located in the western Pacific Ocean, it’s an 11,000m journey from the surface to the very bottom.  When you think that Mount Everest is just under 9,000m, it provides some perspective on just how deep we’re talking about.

It’s a film that’s very Cameron centric (perhaps too much so).  He provides a lot of narration to help us understand what he’s trying to achieve.  He makes the point that we’ve used Google Earth and Google Street View to document so much of the planet’s land surface.  We spend billions on space exploration, have sent several men to the moon, and have now placed a planetary rover to Mars.  He wants to raise awareness about the importance of the oceans to our own ecosystem (an area which he feels has been neglected) and also see what cool creatures can be found at the deepest depths.

Director Ray Quint, the man responsible for pulling all the footage together, has hedged his bets and tried to come up with a film that will please a broad audience.  If you’re a lover of science, exploration and research, you’re likely to be drawn into the film’s “educational” elements.  You can see how the submersible was created, what technology was utilised, and what samples were brought back to the surface for analysis.

On the other hand, if you’d prefer something a little more suspenseful, you’ll probably find yourself more interested in the film’s dramatic elements.  We all know that James Cameron lives to tell the tale… but you’ll still feel the tension as some of the test dives go pear shaped.  When you’re kilometres below the surface and locked in a tiny sphere with virtually no leg room, you don’t want to hear a loud crack (and yep, this does happen during the movie).

There aren’t any ground-breaking revelations and it’s too melodramatic in places but Deepsea Challenge is still an appealing documentary that shines the spotlight, both physically and metaphorically, on a very dark place.

You can read my chat with director Ray Quint and "star" James Cameron by clicking here.