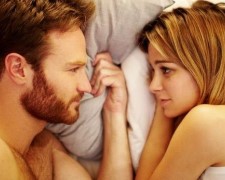 It remains one of my favourite scenes from a movie.  In The People Vs. Larry Flynt, released back in 1996, Flynt (played by Woody Harrelson) stands on the stage at a political rally and asks people to re-evaluate their morals.  He notes that “murder is illegal, but if you take a picture of someone committing the act of murder, that puts you on the cover of Newsweek and you might even win a Pulitzer Prize.”  On the flip side, “sex is legal” and yet “if you take a picture of two people in the act of sex, or even just take a picture of a woman’s naked body, they’ll put you in jail.”

In contrast, you’d have to go number 14 on the box-office list before you found a film with nudity (The Hangover III) and you’ll need to look all the way down to number 57 (Safe Haven) until you come across a movie with a single sex scene.  Why the imbalance?  Most people have sex (or at least want to be having sex).  It’s legal, there’s nothing wrong with it… and yet, big movie studios steer away from it when putting up the cash for their latest ventures.

It’s part of the reason why 33-year-old Australian Josh Lawson wrote his script for The Little Death.  He acknowledges that sex has been treated as a “taboo” subject for far too long and it’s time to start asking questions as to why.  His film reminded me a little of Love Actually in the sense that it contains a group of unrelated short stories that follow a series of couples as they try to push their relationships in a positive, forward-moving direction.

The catch is that they’re all looking to explore a particular fetish.  Maeve confesses that she wants to be forced into rough sex by a stranger (although the fantasy will be played out by her boyfriend).  Phil’s relationship lacks passion but he is aroused while watching his wife sleep.  Dan and Evie have turned to roll play (dressing up as doctors, police officers) try to spark their sex life.  Rowena hasn’t had an orgasm in years but suddenly finds herself stimulated when her husband starts to cry.  Sam is a deaf man who finds pleasure using a phone sex hotline… but only because there’s a young sign-reader helping him out.

In formulating the screenplay, Lawson has blended both comedy and drama.  It works in some places.  It doesn’t work in others.  The film’s highlight is at the very end – a lengthy, laugh-out-loud sequence where the deaf man forces an unsuspecting call centre operator to use some awkward sign-language gestures.  It’s pure comedy.

The film’s darker moments aren’t quite as effective.  There’s a scene where a man (played by Lawson) asks a friend if he’s ever raped someone so as to try to get some background information for his wife’s fantasy.  I fully support edgy comedy but the way the characters interact here is a little too flippant.  They stop acting like “real people” and the humour doesn’t feel natural.

I’d also argue that some jokes are too obvious.  For example, there’s a moment where the woman turned on by crying brings home Sophie’s Choice from the DVD store for her husband.  The audience was laughing well before the punchline was delivered.

I enjoy movies that take chances and in its defence, The Little Death is doing just that.  It’s an unorthodox subject matter that blends tones and doesn’t provide a neat, clean, happy-go-lucky ending.  There’s stuff to think about here as you leave the cinema.  I just wished the execution was better.

You can read by chat with writer-director Josh Lawson by clicking here.