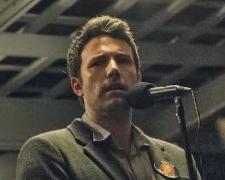 There are few Hollywood directors who have delivered quality films as consistently as David Fincher over the past two decades.  I’m talking about Seven, The Game, Fight Club, Zodiac, The Curious Case Of Benjamin Button, The Social Network, and The Girl With The Dragon Tattoo (I’ve deliberately left off Panic Room).

Gone Girl marks his 5th consecutive feature film that isn’t an original story.  Rather, it’s using a popular novel as its source material.  American author Gillian Flynn, a former writer for the Entertainment Weekly magazine, first published her book in 2012.  It soared up the best-seller charts and the film rights were quickly snapped up by Reese Witherspoon (yes, she’s a producer on the side) and 20th Century Fox.

Like all good thrillers, it’s tricky to work out how much to reveal in a review (for the benefit of those who haven’t read the novel).  If I work solely from what is divulged in the trailers, Gone Girl is the story of Nick Dunne (Affleck) – a struggling bar owner from Missouri who has been accused of murdering his wife, Amy (Pike).  There’s no body and no weapon… but the circumstances surrounding her disappearance are suspicious.

Given that Amy is the daughter of a successful writer, it’s the kind of case that becomes headline news across the United States.  Everyone has an opinion as to whether he’s guilty or innocent.  It’s effectively “trial by media” with fresh information being provided to the thirsty public each day – some of it fact, some of it mere speculation.

It’s this part of the film that I found the most engaging.  The recent murder trails of Gerard Baden-Clay and Oscar Pistorius have highlighted our seemingly insatiable interest in certain crimes.  What is it about these particular cases that generated such public interest?  Why are we so quick to form and opinion as to guilty or innocence based on a splattering of information (sometimes false) in news reports?

Nick is originally perceived by the public as a nice guy.  They believe the story that his wife must have been kidnapped.  However, when Nick is seen smiling for a split-second at a press conference, people start to think otherwise.  We have this perception how people “should” reaction in such a situation and so when reality doesn’t match up, it creates doubt in our minds.

There are many characters in this ensemble and the film provides much insight by looking at the situation through all of their eyes.  Two police detectives (Dickens and Fugit) have identified Nick as the key suspect and are trying to find enough evidence to charge him.  Nick’s sister (Coon) is trying to be as supportive as possible but senses that her brother is hiding something.  Nick’s attorney (Perry) is heavily focused on spinning the media back in his client’s favour.  Amy’s parents are co-ordinating a large search party while trying to deal with their own suspicions.

Unfortunately, all the good work is brought undone by a rubbish ending.  To use a metaphor, it’s like getting a call from a telemarketer who just won’t take no for answer.  You understand what they’re trying to sell.  That’s not the issue.  The problem for them is that you’re not interested in buying.  To come back to Gone Girl, I understand what message this film is trying to sell in its final 20 minutes… but I simply didn’t buy it.  Characters start acting in a nonsensical manner so as to fit the predetermined conclusion.

It’s a long film a two and a half hours and I think there’s a lot to like here… but Gone Girl rubbed me up the wrong way at its pointy end.