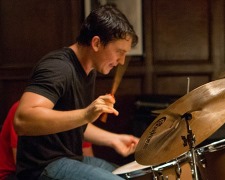 Andrew Neyman (Teller) is a talented jazz drummer in his first year at the most prestigious music school in the United States.  In the film’s opening scene, we see him practicing late one night to the point where the drumsticks have left blisters on his hands.  Appearing to have very few friends, Andrew is prepared to forgo an active social life in pursuit of his goal – to be the world’s best drummer.

In that same opening sequence, he is spotted by Terence Fletcher (Simmons) – the school’s chief music conductor.  There are some teachers who like to be friends with their students and take the “softly, softly” approach.  Fletcher is not one of them.  When he storms into a rehearsal room, he always brings a sense of fear.  Everyone falls silent.  Their eyes collectively look to the floor.

There’s a nice side to Fletcher that is fleetingly visible.  For example, we see him talking sweetly to a young child and inspiring her to become a successful pianist.  Such moments are forgotten when you see the second of his two faces.  He tells a female saxophonist that she must have been selected because of her good looks and not her talent.  He teases another student about his weight and then accuses him of playing out of tune (when that’s not actually the case).

The opening half of Whiplash is about trying to understand Fletcher.  When he’s throwing chairs at students from across the room and when he’s reducing them to tears with his sadistic comments, is there a method to his madness?  Is he using fear to motivate the students?  Is he trying to separate the good from the great?  Or… is he just an odious human being?  Does he take pleasure from the humiliation and degradation of those under his control?

The film’s second half flips the focus – it’s about trying to understand Andrew as Fletcher’s emotional abuse and intense practice regime starts to take its toll.  Andrew clearly has a love for drumming but he now has doubts.  Does he actually have what it takes to be a professional?  Have Fletcher’s unorthodox techniques exposed his weaknesses?  Or… does he believe in himself enough to push back?  Should he stand up to Fletcher and put him to the test in return?

Winner of the Audience Award and Grand Jury Prize at the Sundance Film Festival back in January, Whiplash is a powerful film headlined by two passionate performances.  Fletcher is a character whose actions and insults could easily become laughable if overplayed.  Thankfully, that’s not the case thanks to the brilliance of J.K. Simmons (Spider-Man, Juno).  Writer-director Damien Chazelle considered Simmons for the role after recalling his equally strong presence in the 1990s television series, Oz, set in a maximum-security prison.

It feels like Miles Teller has been around for a lot longer than 4 years.  After making his debut in 2010’s Rabbit Hole, Teller has built a name for himself through a series of teen-orientated movies including Project X, The Spectacular Now, That Awkward Moment and Divergent.  You’ll see a different side of Teller here as he deftly illustrates Andrew’s skill with the drums but also his fragile mental state.  He draws on numerous emotions and it’s a performance equal to that of Simmons.

Before the shoot, Teller spent months improving his drumming skills under the tutelage of Nate Lang – a member of a New York based band known as the Howlin’ Souls.  It’s a nice touch that Lang plays Andrew’s drumming rival, Carl, in the film itself.

The screenplay rushes through some events a little too quickly but this is still an impressive achievement for Chazelle who loosely drew on his own experiences when creating the story.  It wants you to dissect these intriguing characters and also reflect on what it takes, rightly or wrongly, to succeed.