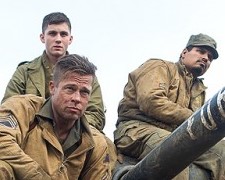 It’s April 1945 and Sergeant Don Collier (Pitt) is leading a small group of U.S. soldiers as part of the broader effort to win the war.  He tells a fellow soldier that “I started this war killing Germans in Africa, then I killed Germans in France, and now I’m killing Germans in Germany.”  The allies have the upper hand but Collier knows there is much more work to be done before the Germans are defeated.

Collier and his team operate an M4 Sherman tank, which they’ve named “Fury”, and the film follows a series of missions that they’ve been given to complete.  These include the rescue of a U.S. platoon trapped in an open field and the guarding of a crossroad against an advancing German army.  The guys know they’ve been lucky so far.  They’ve seen many tanks destroyed and many fellow soldiers killed.  They put on a tough face but the weight of the war is starting to take its toll on them physically and mentally.

There are some fierce, bloody battles in Fury but at its heart, this is a character-driven drama that centres on the dynamic between two different people.  Collier is the experienced “veteran” who has seen it all.  Norman (Lerman) is the newcomer – a quiet clerical worker who has been asked to join Collier’s crew as an assistant driver to a lack of available soldiers.  He can type 60 words a minute… but he has never set foot in a tank and has never shot a gun.

Collier realises that Norman is a liability.  He and his crew (LaBeouf, Peña, Bernthal) have been together a long time and he’d made a lofty promise that he’d keep them all alive.  He tells Norman straight up that “you’re getting in the way of that.”  There are no other options though.  Collier has to find a way to connect with the fearful Norman and transform him into a battle-ready soldier.  There’s one piece of advice that resonates strongly – “ideals are peaceful, history is violent.”

There are times when the film is too staged.  For example, there’s a scene where the soldiers befriend two German women in a small town.  It’s a moment where there’s too much going on at once – Norman discovering his first love, Collier showing a softer side, and the other soldiers revealing their true nature through the power of alcohol.  It didn’t feel authentic.  The same can be said of the climax to this sequence (which I won’t reveal).

Like other war films, Fury covers the familiar themes of heroism, comradery and brutality.  It’s also tapping into our love of underdog stories.  There are plenty of instances in this movie where these characters could have been killed.  Instead, we see them rely on their own physically and a hell of a lot of luck to get the job done.  It reminded me a little of last year’s Lone Survivor in that regard.

Fury’s most impressive attributes are the great leading performances from Brad Pitt (we all know who he is so I won’t list any credits) and Logan Lerman (The Perks Of Being A Wallflower, Percy Jackson series).  As I’ve alluded to above, they share some great conversations and I enjoyed watching the relationship develop between them.

It’s not as gritty or emotive as the top World War II films (such as Saving Private Ryan and The Thin Red Line) and it’s very much towing a patriotic U.S. line but Fury is still an involving war drama.