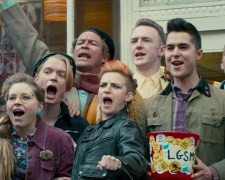 The UK miners’ strike in 1984 has been well documented.  The Margaret Thatcher led government announced the closure of numerous coal mines across Britain.  The National Union of Mineworkers responded by initiating a national strike.  It was an issue that divided the country and it wasn’t until almost a year later that the workers finally relented and returned to the mines.

The strike provided the backdrop to 2000’s much acclaimed drama, Billy Elliot (still my all-time favourite film).   Writer Stephen Beresford and Tony Award winning director Matthew Warchus (Matilda: The Musical) have borrowed from the same piece of history to create Pride.  The focus here is not so much on the miners but rather a group of gay and lesbians fighting for their own equality.

Based on actual events, the story is largely centred on Mark Ashton (Schnetzer), a twenty-something year old gay rights activist living in London.  Looking to improve the public’s perception of the homosexual community, Mark starts a campaign known as “Lesbians and Gays Support the Miners.”  He and his friends collect money on the street and then pass the proceeds through the National Union of Mineworkers.

It’s a good deed… but one with a dual purpose.  By targeting the miners, who now find themselves marginalised like many homosexuals, he hopes to build a rapport that can break down barriers.  It won’t be easy though.  There are plenty of folk on both sides of the fence who have doubts.  Some have much stronger moral objections.

Pride is an ensemble piece with most characters leaving an impression.  A subdued Bill Nighy (The Boat That Rocked) and an excitable Imelda Staunton (Vera Drake) play residents of a small Welsh town who embrace their new gay friends.  George MacKay (Sunshine On Leith) features as a closeted youngster who sneaks out of his parents’ house to help the cause.  Andrew Scott (Sherlock) plays a middle-aged gay man looking for the courage to speak to his mother for the first time in almost two decades.

Some have panned the film for its narrow focus.  They believe it glosses over the plight of the miners (who ultimately lost) and the rising impact on AIDS within the gay community.  Others have criticised the film for its lack of historical accuracy.  They claim that it oversimplifies the characters and makes things out to be far too black and white (for example, the real Mark Ashton was far more politically driven that the film suggests).

These detractors are in the minority.  Pride premiered at the Cannes Film Festival (as part of the Directors’ Fortnight program) and performed solidly at the box-office when released in the U.K. last month.  The high grading from the public on the Internet Movie Database (a current score of 8.1 out of 10) suggests that most are seeing this film as it was intended – as a warm-hearted, feel-good comedy that embraces its 1980s setting and highlights a small piece of forgotten history.