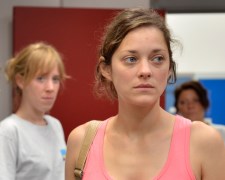 A small Belgian solar panel factory has 17 employees.  One of them, Sandra (Cotillard), suffers a stress-related breakdown and is granted extended leave.  During her absence, the business goes through a slight downturn.  Management believe the work can comfortably be performed by just 16 employees.

Instead of making the tough decision himself, the boss shirks the responsibility and throws it over to the staff by way of a vote on a Friday afternoon.  They have two choices.  Option one – they can agree to terminate Sandra and with the cost savings generated, they will all receive a bonus of 1,000 euro.  Option two – they can agree to keep Sandra but they will not receive any bonus.

The vote takes places without Sandra’s knowledge and the overwhelming majority go with the first option.  The bonus was simply too great to pass up.  Sandra gets wind of the decision via a phone call and is immediately overcome with emotion.  Her income is critically important to her husband and two children.  Without Sandra’s job at the factory, they will most likely default on their mortgage and be forced into public housing.

Sandra confronts management and requests a second vote.  She argues that the employees were pressured into choosing that particular option and further, she was not present so as to put forward her own arguments.  It is agreed that a second vote will take place on Monday morning by way of a secret ballot.  It leaves Sandra with 48 hours to get in touch with her 16 co-workers and try to convince a majority that she deserves to stay.

My attention wavered during several chunks of Two Days, One Night.  Once the premise is established, it becomes repetitive in the way that Sandra tracks down and speaks to the other employees.  She outlines her position and they fire back with their own views.  Some throw their support behind her.  Others do not.  It leaves Sandra wondering if she’s in a lose-lose situation.  Even if she can win over a small majority, how easy will it be to work with those upset that they’ve lost their important bonus?

Why the film is worth your time is for its exploration of mental illness.  Sandra is already battling depression and these events have the potential to further rupture her self-esteem.  It’s a wild roller coaster.  Her spirits are instantly lifted when she speaks to a colleague who agrees to vote for her.  All that positivity is lost an hour later when she speaks to someone else with an opposing view.  It leaves her husband, Manu (Rongione), scrambling to keep his wife upbeat.

After premiering at Cannes, the film moved on to the 2014 Sydney Film Festival where it defeated 11 other films to win the Official Competition.  It was recently announced as Belgium’s entry for the foreign language category at the 2015 Academy Awards and many pundits believe it will be nominated.  Much of the praise is being directed at French actress Marion Cotillard (La Vie En Rose, Inception) who is terrific in the leading role.  She draws on a wide range of emotions and her passionate performance with resonate with many.