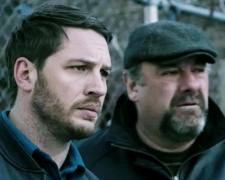 American author Dennis Lehane has some powerful fans in Hollywood.  Three of his novels have previously been brought to the big screen by top-notch directors – Clint Eastwood for Mystic River, Ben Affleck for Gone Baby Gone and Martin Scorsese for Shutter Island.  The catch is that while these intriguing films were based on Lehane’s work, other writers were responsible for the adaptation from lengthy novel to two-hour screenplay.

That’s not the case this time around.  Based on his own short story (entitled “Animal Rescue”), Lehane has crafted a script that bears all the trademarks of a traditional crime drama.  It centres on a quiet, unassuming guy named Bob Saginowski (Hardy).  He doesn’t seem that bright and his social skills are lacking.  That said, he’s somehow found a job working at a small bar named Cousin Marv’s.

Marv’s (Gandolfini) name may still be on the front door but he’s no longer the owner.  He sold out years ago to a group of wealthy Chechens who are using the bar as part of a money laundering operation.  Bob and Marv take home their small salary and turn a blind eye to all the illegal activity.  It’s not like they have a choice though.  Those who have double-crossed the Chechens have a knack for disappearing… permanently.

Things start to get messy when the bar is held up late one night.  The two masked thieves escape with only about $5,000 in cash but that’s not really the point.  The question is – who would have the audacity to steal from the wealthy Chechens?  Did they simply not know who owned the bar?  Or is there something much more devious going on here?

A few other characters are brought into the mix to keep you guessing.  Detective Torres (Ortiz) is investigating the robbery and a handful of other crimes in the neighbourhood.  Nadia (Rapace) is a young woman from the neighbourhood with a hidden past.  Eric Deeds (Schoenaerts) is a local goon who is suspected of being involved in a much talked about murder.

This is a decent drama.  It’s not ruined by overly convenient moments or unbelievable twists (as tends to be case with such films).  You may be a little confused by these characters are first but as their motivations are revealed, you start to realise the sense in their actions.  It all leads up to a worthy ending and a particularly memorable line from the police detective (which sums it all up).

That said, it is a little slow in places.  A significant chunk of time is spent watching Bob bond with a puppy dog that he finds in a rubbish bin.  Yes, it’s a cute dog that will woo audiences but it feels like an odd plot device.  I’m not fully sold on its purpose.  I was also unconvinced by the budding friendship / relationship between Bob and Nadia.  It’s hard to figure out what’s drawn them to each other.

It’s worth noting that The Drop marks the final on-screen performance for James Gandolfini (The Sopranos) who passed away in June last year.  It’s nice to see him one final time and so yeah, that in itself is a good enough reason to see this film.