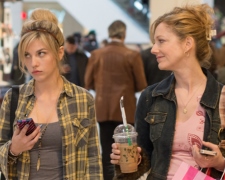 The way in which people connect has transformed significantly over the past decade.  That’s certainly a key theme in Men, Women & Children – the latest effort from writer-director Jason Reitman (Juno, Up In The Air).  There isn’t really a leading character.  Drawing from Chad Kultgen’s novel of the same name (first published in 2011), the film weaves a group of loosely related stories together.

Starting with the adults… Don (Sandler) is a middle-aged man who seems to be more interested in downloading pornography than sleeping with his wife.  Helen (DeWitt) is a married woman who has found a website designed for those looking to have an affair.  Patricia (Garner) is an overprotective mother who checks her teenage daughter’s internet use every day.  Kent (Norris) is a football-loving father who doesn’t understand why his son has lost interest in the sport.  Joan (Greer) is a single mum who is nurturing her daughter’s aspirations to become a reality television star.

There’s a lot of troubled characters and to the film’s credit, most of them are quite interesting.  The common link is that they’ve all turned to the internet in search of interaction – sometimes in a positive way, sometimes in a negative way.  People often lament about the “good old days” where you met people face-to-face or spoke to them over the phone.  Reitman’s film shows how much the world has changed through the advent of social media, dating apps, blogs, adult websites, and shared video games.  There’s plenty of food for thought here.

In terms of the performances, it’s the younger cast members that shine most brightly.  They deftly illustrate the complexities of finding friends, discovering love and exploring their sexuality in today’s age.  I wasn’t as enamoured by the adult storylines.  Jennifer Garner feels too over-the-top as a mother who essentially stalks her own children.  There are still some nice conversations though and an exchange between Judy Greer and Dean Norris in a restaurant springs to mind.

Much of the film’s hard work is undone by a weak finale.  Most of the characters go through a life-changing epiphany that doesn’t ring true.  It’s as if writers Jason Reitman and Erin Cressida Wilson are trying too hard to wrap everything up neatly for the audience’s satisfaction.  I’ve a hunch that if we revisited these characters in a year’s time, not all would be as happy and as stable as the conclusion suggests.