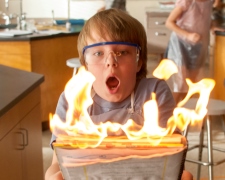 11-year-old Alexander Cooper (Oxenbould) has been having a bit of a bad run.  He tripped over and landed on his face when trying to impress a girl.  He set fire to a poster at school while conducting a science experiment.  Now, he’s just found out that a super-popular classmate has scheduled his 12th birthday party for the same date and time as his own (meaning no one will come to his).

Alexander’s family aren’t offering a lot in the way of sympathy.  They’ve taken the optimistic view that “there’s no such a thing as a bad day, it’s all how you look at it.”  I guess it’s any easy philosophy to buy into when things are going well.  His dad (Carrell) is set to get a better job at a cool company, his mum (Garner) is up for a big promotion at work, his older brother (Minnette) is set to get his driver’s licence, and his older sister (Dorsey) is about to star in a high school play.

So as the clock reaches midnight and his 12th birthday begins, Alexander makes a simple wish – that his fellow family members realise what it feels like to have a bad day.  Sure enough, it comes true in spectacular fashion.  The next few hours will see the cheerful Cooper family go through a wild assortment of dramas that provide a very different perspective on life.

This is a good, old-fashioned family comedy.  It reminds me of similar live-action films I enjoyed growing up in the early 1990s including Home Alone, Mrs Doubtfire and Jumanji.  Kids will have no trouble following the simple storyline.  Adults will be able to relate to the broad premise – let’s be honest, we’ve all had terrible, horrible, no good, very bad days at some point in our lives.

This may be a high-profile Walt Disney Studios production but the film’s star is Ed Oxenbould, a 13-year-old Aussie with limited acting experience.  He went through a raft of auditions and beat out more than 500 American youngsters to land the title role.  Director Miguel Arteta described him as a “real kid” who was “not too over-the-top and fake” and yes, I agree with him.  It’s a neat way of summing up what makes Oxenbould’s character so fun and likeable.

The movie is loosely based on the 32-page children’s book of the same name written by Judith Viorst (it was first published in 1972).  I’ve had a few people look at me quizzically when I’ve mentioned the title but I’m glad to see they’ve stuck with it here.  It’s catchy... and it also captures the film’s essence – something that’s fun, silly and crazy.  A great choice for the family as the Christmas school holidays kick off here in Australia.

You can read my chat with Aussie star Ed Oxenbould by clicking here.