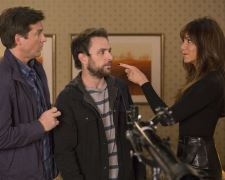 Released back in 2011, Horrible Bosses was a successful dark comedy that followed three guys of questionable intelligence who attempted to kill their respective bosses.  It didn’t go as planned but in the end, their problems were solved and they all escaped jail time.  It may sound like quite a sick premise but the film worked because (1) it was so ridiculously over-the-top that you couldn’t take it seriously, and (2) there was great comedic chemistry between the three leads – Jason Bateman, Charlie Day and Jason Sudeikis.

This latest sequel reunites them under different circumstances.  Nick, Dale and Kurt no longer have to worry about evil, vindictive, overbearing bosses.  That’s because they’re working for themselves.  They’ve started their own company and are trying to sell a new type of shower head that they’ve named the “Shower Buddy” (after much debate).

After making a deal with a wealthy businessman (Waltz) to invest in the product, our illustrious trio take out a $500,000 loan and kick start production.  Unfortunately, they’ve been set up.  The businessman, Burt Hanson, reveals that no formal contract was signed.  He intends to renege on the deal, bankrupt their company, and take the Shower Buddy stock at a greatly reduced price.

Nick, Dale and Kurt have decided against murder as their revenge tool in this instance.  They’re branching out into something different – kidnapping.  Acting on the advice from an old criminal acquaintance (Foxx), they concoct an elaborate plan to kidnap Burt’s son, Rex (Pine), and demand a ransom of $500,000.  Just like the first film, it all degenerates into a complete farce with plenty of laughs.

Director Seth Gordon didn’t return for this sequel (he was off working on other projects).  Instead, Sean Anders steps into the hot seat as his replacement.  Anders’ resume wouldn’t exactly fill you with confidence (he was a writer on Hot Tub Time Machine, Mr Popper’s Penguins and That’s My Boy) but he’s preserved the spirit of the original and delivered a film worth your money.

In articulating my thoughts, I may as well do a “cut and paste” job from my review of the last movie.  The dynamic between the three leading actors makes the far-fetched premise work.  Jason Bateman plays the serious, logical guy.  Charlie Day plays the moronic goofball.  Jason Sudeikis fits somewhere in between.  The supporting players all make the most of their limited screen time.

The film also picks up points for its screenplay.  Comedic sequels often fall into the trap of sticking too closely to their predecessors but that’s not the case here.  Instead of more “boss killing”, the two-man writing team have crafted a fresh scenario that has room for returning cast members (Jamie Foxx, Jennifer Aniston, Kevin Spacey) as well as new recruits (Christoph Waltz, Chris Pine).

I wouldn’t say it’s better than the original… but it’s very close to being its equal.