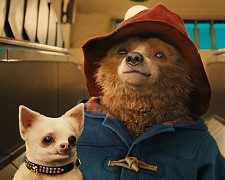 Put yourself in the shoes of Mr Brown.  You’ve just stepped off a train and see a small talking bear waiting on the platform.  It turns out the bear is at the end of an incredibly long journey from “Darkest Peru” and is looking for somewhere to live in London.  Listening to the strong pleas of your wife and two children, you reluctantly agree to let the bear stay the night.

So what’s the first thing you do on getting home?  In the case of this Mr Brown, who just so happens to work as a risk assessor, he calls his insurance company.  He wants to make sure that he’s covered for any “bear related damage” in case the whole thing goes pear shaped.

The point I’m trying to make is that this is more than just a simple kids’ film about a cute coat-wearing bear.  Yes, there are scenes where the bear causes absolute mayhem which will leave most children laughing.  A moment where he uses Mr Brown’s toothbrush to clear the gunk from his ears springs to mind.  Just as importantly though, there’s enough humour for adults (evidenced by the insurance example) to keep them equally entertained.

The film opens with a short backstory.  We learn that Paddington (voiced by Ben Whishaw) was raised by his loving aunt and uncle in a beautiful Peruvian forest.  Many years ago, they were visited by an English explorer who promised that if they ever came to London, he’d welcome them into his home.  That pretty much leads into the current day narrative.  Paddington is travelling alone as his uncle recently passed away and his aunt is quite frail.

The Brown family are doing their best to help Paddington track down the English explorer (no one knows his name) but a villain is thrown into the mix to make life more difficult.  A museum taxidermist (played by Nicole Kidman) is looking to get her hands on the bear so it can be killed and stuffed for her own private collection.

What struck me most about the film was the quality of animation.  I make this statement about so many animated features but the bar keeps being raised higher and higher.  Once you get caught up in the story, you’ll quickly forget that Paddington is the creation of the gifted animation team.  From his mannerisms to his thick fur, the attention to detail is incredible.

The storyline is sweet and simple – another positive if taking young children along.  The film’s weaker moments tend to revolve around Kidman as the villain.  She’s a silly, non-threatening character and it makes me wonder if Paul King and Hamish McColl were afraid of making something that might be too dark for the kids.

With Alexander & The Terrible, Horrible, No Good, Very Bad Day released last Thursday here in Australia, it looks like there are plenty of decent offerings for children and their accompanying parents over the school holidays.