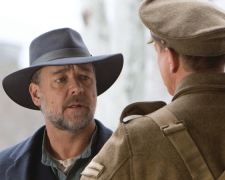 On 6 August 1915, Australian soldiers commenced an attack against the Turkish army in Gallipoli.  It became known as the Battle of Lone Pine and the death toll, on both sides, was huge.  When the final bullet was fired 4 days later, roughly 2,000 Australians and 7,000 Turks had lost their lives.  The battle formed part of the climax of Peter Weir’s 1981 war drama, Gallipoli, which many regard as one of the great Australian films of all time.

Russell Crowe’s directorial debut, The Water Diviner, takes the same period of history and looks at it from a different angle – the aftermath.  Crowe plays Joshua Connor, a Victorian farmer who lost all three of his sons in the Battle of Lone Pine.  Further tragedy was to follow when his wife, unable to cope with the death of her children, committed suicide.  Standing over his wife’s grave, Connor makes one final promise – “I’ll find them and I’ll bring them home to you.”

The year is now 1919 and the war is over.  Connor has made the long trip to Gallipoli so as to find his sons’ bodies and return them to Australia.  He soon learns that a recovery operation is already underway.  Despite being the fiercest of enemies several years ago, Australian and Turkish soldiers were now working together to locate the bodies of those left behind on the battlefields

Leading the operation are an Australian lieutenant colonel (Courtney) and a Turkish war hero (Erdogan).  They want nothing to do with Connor at first.  There’s much work to be done and they’d rather not be side tracked by a near-impossible search for three particular bodies.  Connor wins them over however and over the next few days, he learns much about the atrocities that took place in Gallipoli.

It’s a curious piece of history and I was intrigued by the broad subject matter.  Most war films tend to focus on epic battles and it’s not often that we follow those affected in the aftermath.  Here, Connor is trying to locate his sons... but he requires the help of a Turkish major who was part of the army that probably killed them!  It’s a crazy scenario that only further highlights the futility of war and the value of forgiveness.

Despite my interest, there are several elements to The Water Diviner that left me puzzled.  Embedded throughout the film is a layer of “spirituality” that borders on science fiction.  When Connor reaches Lone Pine, he seems to be guided by a higher power that takes him directly to his sons’ remains.  He also has some kind of “sixth sense” that allows him to see his sons’ final moments by way of flashback.  It’s all very strange.

The film also tries to establish a romantic subplot.  Connor befriends Ayshe (Kurylenko), a Turkish widow operating a small hotel in Istanbul.  Ayshe lost her husband in the war and is now being pressured into marrying his brother (something she objects to).  Given that Connor is still coming to grips with the death of his own wife (it’s the main reason he’s in Turkey to begin with), it’s hard to believe that he can fall so quickly for someone he knows so little about.

Crowe has used a large contingent of Australian actors as part of his supporting cast.  You’re likely to recognise a few familiar faces including Jacqueline McKenzie, Dan Wyllie, Damon Herriman, Ryan Corr, Steve Bastoni and Megan Gale.  The scene stealer is 12-year-old newcomer Dylan Georgiades who plays Ayshe’s young son.  He plays a fun, curious character and shares some great conversations with both Crowe and Kurylenko.

The film recently received 8 nominations for the upcoming Australian Academy Awards (AACTAs) although, in a curious twist, Russell Crowe was overlooked in the best director category.  Hopefully he won’t take that (or this review) too personally.

You can read my chat with star Olga Kurylenko by clicking here.