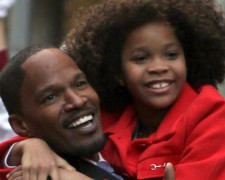 You can’t fit a square peg into a round hole.  That pretty much sums up my thoughts on Annie – a remake of the successful musical that first opened on Broadway back in 1977 (although some will be more familiar with the 1982 film version).  Screenwriters Will Gluck (Friends With Benefits) and Aline Brosh McKenna (The Devil Wears Prada) have failed miserably in their attempts to take this classic tale, which was originally set in the Great Depression, and adapt it to a current day setting.

Let’s start from the beginning.  Annie (Wallis) hasn’t grown up in an orphanage.  Instead, she’s been shipped from foster home to foster home.  Her latest guardian is Miss Hannigan (Diaz), a welfare cheat who is currently looking after 5 kids.  She’s not doing it out of the goodness of her own heart.  It’s solely because she pockets $735 per week from the government.  The character would be a perfect fit for the next Housos Vs. Authority movie.

Moving along… Annie finds herself rescued by Will Stacks (Foxx), a ridiculously wealthy telecommunications tycoon.  He’s s a repulsive individual who uses his elaborate mobile phone network to illegally spy on his customers.  If you think that’s bad… Stacks’s new goal is to become Mayor of New York City.  He has no actual policies and isn’t really concerned about the city’s residents.  He’s only doing it to further his elaborate business interests.

So why has Stacks taken Annie into his care?  It’s not because he’s kind, generous or sympathetic.  Rather, he’s doing on the recommendation of his political advisers (Cannavale and Byrne).  They all believe it’ll show his “softer side” and provide a much needed boost in the mayoral polls.  What’s the harm in splashing an orphaned young child across newspapers for political gain, right?  Can’t be any worse than setting up a Twitter account in her name to post campaign information!

Thankfully, Annie is a great judge of character.  When asked by her friends if Stacks is a nice guy, her response is “I think so… he just doesn’t know it yet.”  I’d probably say the same thing if given the chance to live in lavish penthouse with floor-to-ceiling windows looking out over the heart of New York City.  Oh, and she gets a cute dog too.  It’s what we all want out of life apparently.

Nothing in this film rings true.  The fact that Stacks’s approval ratings soars as a result of the “Annie factor” is laughable.  If Donald Trump ran for President and took a 10-year-old orphan with him on the campaign trail, social media would eat him alive.  The film’s rushed ending (which I should but won’t spoil) makes even less sense.  Some characters (Stacks included) deserve to be hanged, drawn and quartered.  Instead, they get a warm hug and a pat on the back.

The writers have stuck with many of the songs from the original musical.  They include catchy numbers such as “It’s A Hard Knock Life”, “Tomorrow”, and “I Think I’m Going To Like It Here.”  Unfortunately, the performance of said songs has been overproduced by director Will Gluck.  The choreography is too busy, the lyrics are difficult to follow, and the miming couldn’t be more obvious.  They’re no fun to watch at all.

There are brief glimpses of comedic promise (a scene in a movie theatre springs to mind) but for the most part, this is a bizarre family-orientated musical that requires you to wear thick rose-coloured glasses.