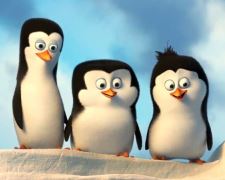 By my count, there were at least 30 reboots, remakes, sequels and spin-offs released in Australian cinemas during 2014.  This year starts in a similar vein with Taken 3, Dumb & Dumber To and Penguins Of Madagascar all released inside of the first two weeks.  It’s as if Hollywood coined the famous mantra – “if you’re on a good thing, stick to it.”

For those keeping score at home, there have been three films in the Madagascar franchise to date.  They have combined for a total worldwide box-office of just under $2 billion (in US dollars).  A fourth instalment is anticipated (with a tentative 2018 release date) but to satisfy us in the meantime, we’ve been given a spin-off which is light in terms of characters but still heavy on action.

Penguins Of Madagascar is centred on the four penguins who only had a small role in the earlier films – Skipper, Kowalski, Rico and Private.  The film opens with a 10 minute prelude that shows us how they first met and why they went in search of adventure (as opposed to sticking it out with their families in freezing Antarctica).

The premise here is somewhat amusing.  An attention seeking octopus named Dave (voiced by John Malkovich) was once a feature attraction at the Central Park Zoo.  He loved doing tricks and fans flocked to see him.  The arrival of four penguins changed everything however.  No one wanted to see an “ugly” octopus any more.  The public now lavished their attention on the cute, furry, fluffy penguins.

Only two things have kept Dave’s zest for life going.  Firstly, he wants to keep adding to his collection of snow globes.  No issues there.  Secondly, he has a “burning thirst for revenge” against the penguins that cut short his career.  He intends to kidnap every penguin on the planet and, using a specially created serum, transform them into hideous, deformed creatures.

It’s not just our four heroic penguins that are trying to save the day.  A crime-fighting organisation known as the North Wind, which comprises a wolf, seal, owl and polar bear, is also trying to get the job done.  Tension develops between them however with egos getting in the way of the greater good.

The screenwriters have included just enough jokes to keep adults entertained.  I had to smile at a scene when Dave to octopus has trouble trying to use a video conferencing device (it’s like something out of an Austin Powers movie).  There’s also some witty celebrity name dropping during the film’s climax.

Kids are easier to please and will probably lap it up.  That said, it lacks many of the endearing characters that have made this franchise so likable (such as Alex the lion, Marty the zebra, and Manny the giraffe).  The film is also too “busy” in places.  As there aren’t enough meaningful exchanges between the characters, the script tries to compensate with elaborate, over-the-top action sequences.

Big Hero 6 and Paddington have my vote as the best family fare over the Christmas school holidays but if you’ve ticked them off your list, Penguins Of Madagascar is still a viable option.