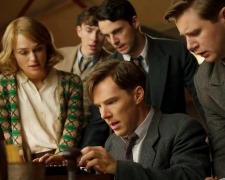 Winner of the People’s Choice Award at the Toronto Film Festival back in September, it’s easy to see why The Imitation Game has been so well received.  The story of Alan Turing is both fascinating and disturbing.

During World War II, Turing was employed by a top-secret government organisation in Great Britain that had been tasked with the responsibility of code breaking.  One of their most important assignments was to decipher messages being sent by German soldiers using their highly sophisticated Enigma machines.  If successful, it would provide the Allies with a wealth of knowledge that would make them almost unbeatable.

Suffice to say that it was lot harder than solving a Sudoku puzzle while on the train to work.  The Enigma machines had 159 million million million possible settings.  If you couldn’t find the miracle answer within a 24 hour period, it was back to the drawing board.  This is because the Germans changed the setting at midnight every day.

It may sound like an impossible task but Turing came up with the answer.  He and his team developed an electromechanical machine that could use predictive text to significantly narrow the number of possible settings.  This provided invaluable assistance to other cryptanalysts who now had the power to crack each day’s code within a matter of minutes.  Many believe that if not for the efforts of Turing, Germany would have won the war.

Using Andrew Hodges’ 1983 biography as its source material, The Imitation Game tells the story using three timeframes.  Most of the film is spent in the 1939-1945 period as we watch Turing (played by Benedict Cumberbatch) go about his work.  He is portrayed as a peculiar individual who preferred to work alone and had a noticeable lack of social skills.  His idea of a compliment is to say “that is not an entirely terrible idea.”

The other two timeframes provide insight into his personal life.  A 1928 storyline follows Turing as a 16-year-old student at an all-boys school in Dorset.  He had few friends but he developed a close attachment to a fellow classmate.  The other subplot is set in 1951 and sees Turing questioned by Manchester police after a suspicious burglary in his own home.

Aside from the absorbing code-breaking premise, there are two powerful elements to this story that leave you with something to reflect upon.  Firstly, once the code was broken, the British military had to be incredibly careful how they used the decrypted information.  If they suddenly turned up at the location of every enemy warship, the Germans would have stopped using the Enigma code knowing it had been broken.

Secondly, the actions of Turing and his fellow codebreakers were classified by British intelligence as being “ultra-secret”.  It wasn’t until the mid-1970s that the military files were released and their efforts became known.  It left historians re-writing textbooks and adding a new, important chapter.

It’s always difficult condensing one’s life into a two hour movie but director Morten Tyldum (Headhunters) and writer Graham Moore have made some odd decisions.  The most obvious is the way in which Turing’s sexuality is downplayed throughout (particularly in the 1928 storyline).  It wants us to feel angry when he his persecuted for being a homosexual (it was a crime at the time)… and yet the film makes no effort to show a relationship with another man.  Instead, it focuses on his not-so-interesting friendship with Joan Clarke, a female codebreaker played by Keira Knightley.

The screenplay also appears to have manipulated one too many facts for dramatic effect.  Turing was never blackmailed because he was gay.  He was never accused after the war of being a spy.  He never employed Joan via a crossword competition.  I’ve further concerns about why Turning is portrayed as such an isolated human being.  There’s a scene where he alone writes to Winston Churchill requesting more funding.  The truth is that Turning and several of his colleagues teamed up to write that letter.

Proving to be a strong contender this awards season, The Imitation Game isn’t quite the film that I had hoped.