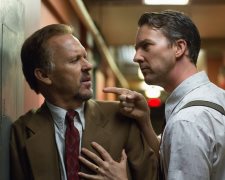 How does an artist measure their success?  Is director James Cameron satisfied that he’s made the two highest grossing films of all time (Titanic and Avatar)?  Is actor Audra McDonald content with the 6 Tony Awards on her mantelpiece?  Is Katy Perry happy with the fact she has more than 60 million followers on Twitter?

These questions get to the essence of Birdman, the latest creation of acclaimed Mexican director Alejandro González Iñárritu (Babel, Amores Perros).  It centres on a middle aged actor named Riggan Thomson (Keaton) who is trying to reboot his sagging career.  Twenty years ago, he was the star of a hugely successful superhero franchise.  Nowadays, he’s a “nobody” struggling to find even the smallest of roles.

Determined to prove his worth as an actor, Riggan has taken the biggest gamble of his professional life.  He’s used the last of his savings to write, direct and star in a Broadway play.  He’s booked a theatre in Times Square, he’s assembled a cast of inexperienced actors, and he’s ready to show the world that he’s more than just a guy in an elastic bird suit.  When Iñárritu’s film begins, we’re just a few days away from opening night.

Cinematographer Emmanuel Lubezki (Gravity, Tree Of Life) was reluctant about the project at first but is now on track to win back-to-back Academy Awards.  He has delivered on Iñárritu’s inspired vision to have the film look like it was shot in a single take.  No cuts, no edits.  I particularly loved the way in which the camera smoothly slips between events and timeframes.

All of this required a huge amount of preparation to make it look so natural, so effortless.  I’m talking about not just the actors but also the editors, the cameramen, the prop guys, the boom operators, the lighting teams and the special effects artists (who had lots to do).  It’s no wonder that most scenes took in excess of 20 takes.  Kudos also must go to composer Antonio Sánchez for his distinctive, drum-based score.

Michael Keaton is superb in the leading role and is currently the short priced favourite to take home the Oscar for best actor.  Some may see parallels with Keaton’s own life given he starred in two Batman movies (released in 1989 and 1992) before disappearing off Hollywood’s radar.   That’s not the case though.  Keaton states in the film’s production notes that he’s “never related less to a character.”  He’s proud of his career and never really had any trouble stepping out from behind Batman’s shadow.

Keaton isn’t the only standout.  Edward Norton (Fight Club) plays Mike Shiner – a troublesome method actor who becomes a late addition to the play (as Fassbender, Harrelson and Renner were all unavailable).  Emma Stone (Easy A) features as Riggan’s daughter – a recovering drug addict looking to connect with her distant father.  Zach Galifianakis (The Hangover) is the biggest surprise as Riggan’s level-headed lawyer.  It seems everyone wants to derail the production but his character is working hard to keep it on track.

It may sound like a drama but Birdman is largely framed as a dark comedy.  You’re unlikely to feel too much sympathy towards these self-absorbed characters and so Iñárritu’s approach is to simply have fun with the scenario.  He skilfully blends reality and fantasy to help us get inside Riggan’s head.  He also throws in a plethora of insults.  When a clueless actor is struck by a falling light, Riggan’s first response is to say “the blood coming out of his ear is the most honest thing he’s done so far.”

What does it all add up to though?  That’s the part I’m still grappling with.  In addition to the theme of “art”, Birdman wants to say something about Hollywood blockbusters, what it takes to be an actor, the value of social media, and whether it’s better to be lucky than good.  Maybe it’s up to us to connect the dots but I was hoping for more resolution than what was offered by the ambiguous finale (which only works if you believe it’s a comedy).

Swamped with praise since its premiere at the Venice Film Festival back in August, I’m confident the film meets Iñárritu’s own definition of success.