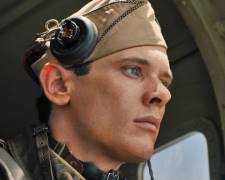 Born of Italian parents in 1917, Louis Zamperini found life difficult growing up in the United States.  Bullied at school and struggling to make friends, Louis natural instinct was to rebel.  He drank, he smoked, and he generally got up to mischief.  There’s a flashback scene early in Unbroken where a police officer tells him straight up – “everyone in this town wants you put away.”

You’ll be left with a wry smile when you see how quickly things changed.  Following the advice of his older brother, Louis took up running.  He wasn’t good.  He wasn’t great.  He was amazing.  That’s what you get when you combine hard work with natural talent.

At the age of 17, Louis would become the fastest high school runner (over a mile) in U.S. history.  Two years later, he was representing his country and competing at the 1936 Summer Olympics in Berlin. Suffice to say that Louis was no longer bullied.  The kid had become a much adored superstar.

Sadly, that would be the pinnacle of Louis’s career.  The 1940 Olympic Games in Tokyo were cancelled due to the outbreak of World War II and so he enlisted in the U.S. Army Air Forces not long after.  He reached the rank of second lieutenant and served as a bombardier aboard a B-24 Liberator.

Most war films feature epic gun fights or heroic rescues.  That isn’t the case here.  Unbroken is about something quite different – the power of human endurance.  Louis was aboard a plane that crashed in the Pacific Ocean in April 1943.  After spending weeks floating on a life raft, he was found by a Japanese navy ship and taken to a prisoner of war camp.  He was tortured and beaten by the Japanese soldiers – the most notable being a ruthless, violent prison guard nicknamed “The Bird” who targeted Louis because of his Olympic history.

There’s a moment early in the film where Louis’s brother gives him a piece of advice that he would carry with him throughout the ordeal – “if you can take it, you can make it.”  Louis didn’t fight back.  He didn’t ask for help from his fellow prisoners.  He didn’t devise a cunning escape plan.  He didn’t try to kill himself.  Louis’s strategy was simple – to fight the fight inside.  He kept quiet, took the beatings, and prayed that the U.S. would one day with the war.

This is a very impressive feature from actor-turned-director Angelina Jolie.  While she’s a relative newbie in terms of direction (she’s only made one feature film previously), she’s backed by a ridiculously talented crew that includes cinematographer Roger Deakins (The Shawshank Redemption), composer Alexandre Desplat (The King’s Speech), and editors William Goldberg (Argo) and Tim Squyers (Life Of Pi).  The screenwriting team, that includes 4-time Academy Award winners Ethan and Joel Coen (No Country For Old Men), also deserve praise for the breadth of material covered in the two-hour running time.  It never at any stage feels rushed.

I wasn’t familiar with British actor Jack O’Connell (This Is England, 300: Rise Of An Empire) prior to the film but I’m his latest fan thanks to his stellar performance as Louis.  He looks like a defeated wreck throughout much of the film’s second half (kudos to the make-up artists) but you can see from his eyes and his body language that he will, as the film’s title suggests, remain “unbroken”.  It’s tough to watch but also hugely inspiring.

In a big coup for the Australian film industry, most of Unbroken was shot in Queensland and New South Wales.  It hasn’t quite generated the Oscar buzz that many were anticipating but it’s performed very well at the U.S. box-office (it’s already made more than $100m) and that’s great to see.

You can read by chat with star Miyavi by clicking here.