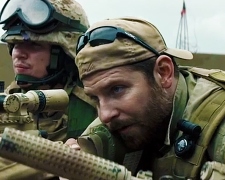 American Sniper tries to juggle too many balls and ends up dropping every one of them.  One third of the film wants to celebrate a brave, real-life American hero.  Trained as a Navy SEAL, Chris Kyle (Cooper) was a proficient marksman who went on four tours of duty during the recent Iraq War and was credited with 160 enemy kills (more than any other sniper).  He was so successful that a group of Iraqi insurgents placed a lucrative bounty on his head.

In the opening half hour, we see Kyle’s first kill in the deserted Iraqi town of Nasiriya.  Lying patiently atop a multi-story dwelling, he spots a mother and child holding a grenade.  Do they intend to hand it over as a gesture of goodwill?  Or are they planning a suicide bombing?  When the child starts moving towards a group of U.S. soldiers, Kyle takes him out with a single gunshot.

It turns out to be the correct decision as the film is very clear to point out that the kid was “evil like I’ve never seen before.”  Why does everything have to be so simplistic though?  I realise he helped save a lot of soldiers (we see him honoured repeatedly) but did Kyle ever kill someone he wasn’t sure about?  Did he take pleasure from killing people (like he did animals)?  It feels like we’re getting a sheltered, overly patriotic view of who this man was.

Another third of the film wants to be a Hollywood-style action thriller.  Several scenes involve Kyle hunting down a Syrian born sniper named Mustafa who was once an Olympic shooter.  This never happened though.  It’s a largely fictional subplot that has been created by screenwriter Jason Hall because all action films need a keynote “villain”.

There’s no chance that you’ll sympathise with Mustafa since we know nothing about his past or his motivations.  He’s just a bad guy with a big gun who doesn’t say a word throughout the whole movie.  Bradley Cooper has described the film as “character study” as opposed to a “political movie” but it is noticeably unbalanced given the lack of time spent exploring the mindset of the insurgents.  If you want me to celebrate Kyle as a hero, at least show me what he’s fighting for and who he’s up against.

The other third of the film is trying to be a relationship drama that explores the heavy emotional toll that often comes with military service.  Kyle found it difficult to return to a “normal life” after his lengthy tours.  Part of him was glad to be home with his family but another part wanted to be back in Iraq and doing what he loved.  There’s a powerful moment when his wife (Miller) puts him on the spot and says “even when you’re here, you’re not here.”

The troubled connection between Kyle and his wife is the script’s most interesting element.  We finally get to see him as a human as opposed to an action hero.  He suppresses his suffering and refuses to talk about his work.  She tries to get him to open up and seek professional help.  Sadly, this area isn’t given enough screen time and is used more as a quick interlude to break up the numerous wham-bam shooting sequences.

I won’t spoil American Sniper’s climax except to say that it is laughably bad.  After discussing various possibilities, director Clint Eastwood decided to wrap up Kyle’s story before a particularly significant event.  It’s just another example of the film going with simplicity over complexity.