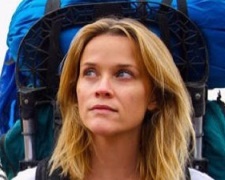 In 1995, a 26-year-old woman named Cheryl Strayed embarked on a 1,800km trek through California and Oregon in the United States.  To put that into perspective for those living here in Brisbane, it would be the rough equivalent of walking south to Melbourne or north to Cairns.  It took three months in total and Strayed wrote about her journey in a memoir first published in 2012.  Thanks to the endorsement of Oprah Winfrey, it spent 7 weeks atop the New York Times Best Seller list (in the nonfiction hardcover category).

As part of a panel discussion at last year’s Toronto Film Festival, Witherspoon lamented that Hollywood hasn’t been making enough great parts for women.  It’s something she’s hoping to remedy through her own film company.  It was actually Witherspoon who bought the rights to Gillian Flynn’s Gone Girl.  With the skilful direction of David Fincher and a fantastic performance from Rosamund Pike, it was a huge box-office success and one of 2014’s most talked about movies.

Witherspoon didn’t take the role of Amy Dunne in Gone Girl.  She freely admits that Fincher was looking for “a certain type of woman” and that she did not quite fit that vision.  That’s not the case with Wild.  Witherspoon purchased the rights to Strayed’s book before it had even been released (she’d read an advanced copy) and immediately had herself in mind for the lead.  Tired of playing romantic love interests, this was her chance to create a character that she describes as “flawed, complex, embarrassed, humbled and fierce.”

Adapted for the screen by Nick Hornby (About A Boy), the film’s early sequences portray Strayed as someone who is ill prepared and out of her depth.  She’s brought the wrong fuel for her stove and so cannot cook a warm meal.  She also struggles to erect her small tent (it requires a thorough reading of the instructions).  What the hell was she thinking?  I remember asking that same question during Into The Wild, a similar tale of self-discovery released back in 2007.

Director Jean-Marc Vallée (Dallas Buyers Club) provides the answer by taking us inside Stayed’s head through a series of quick flashbacks.  She hadn’t gone on this epic hike to improve her fitness.  She wasn’t doing it to raise money for charity.  The truth was that Stayed had nowhere else to go.  She was a recovering drug addict with no fixed address.  She had few friends, few family and a husband who had recently filed for divorced (she cheated on him constantly).

Stayed’s journey could therefore be described as a “cleansing exercise”.  She wanted to escape her old life and transition into a better one.  She meets an odd assortment of characters along the way but strangely, these interactions don’t add much to the overall story (aside from providing a bit of conversation to break up long silences).  Aside from a few early stumbles, I’d also argue there isn’t much in the way of “drama”.  The trail is relatively safe and is used by thousands of hikers each year.

Wild is at its most interesting when it delves into Stayed’s past and explores her relationship with her mother (Dern) and ex-husband (Sadoski).  This is ultimately what the film is about – realising who you are and what you want out of life.  Completing the trek was a great physical achievement… but it would have meant nothing if it didn’t change her as a person.