Review: The Theory Of Everything 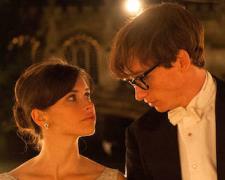 A college guy arrives at a party, looks across the room, and sees a beautiful young lady.  He finally summons the courage to speak with her but it’s an awkward exchange.  He’s nervous and can barely look at her in the eye.  His confidence slowly builds as the night finishes with the exchange of phone numbers.

It’s a somewhat unexpected opening to The Theory Of Everything – a two-hour drama that encompasses the life of the renowned British physicist and cosmologist Stephen Hawking (Redmayne).  Instead of concentrating on his many scientific achievements, which have already been well documented, the film focuses on his personal life and the relationship with his wife, Jane (Jones).  The story begins at the precise moment they first met – at a Cambridge party in 1963.

They were just an ordinary couple at first.  They spent time together, went on short trips, and chatted about meaningless things.  All of that changed when Hawking was diagnosed with amyotrophic lateral sclerosis (ALS) at the age of 21.  Doctors estimated he had 2 years left in live and in that time, he’d lose the ability to walk, to speak and to eat.

Recently nominated for his first Academy Award, British actor Eddie Redmayne (Les Misérables) delivers a knockout performance as Stephen Hawking.  You get a strong sense of the suffering, both physical and mental, that his character had to endure.  This is highlighted in a powerful scene where he tries to climb up the staircase at home after a small dinner party.

I’d argue though that the more interesting character is Jane, played beautifully by Felicity Jones (Like Crazy).  The film asks an age-old question – how far would you go for the person you love?  Instead of giving us a fairy-tale style answer, The Theory Of Everything shows just how tough things were for Jane.  She had to give up her own career aspirations and become her husband’s full-time caregiver.

It’s a decision that would take its toll.  Jane opened her soul in a 1999 biography where she said that “it was becoming very difficult – unnatural, even – to feel desire for someone with the body of a Holocaust victim and the undeniable needs of an infant.”  She also had to grapple with Stephen’s rise in fame.  He was winning awards around the globe.  She was still feeding, bathing and dressing him each morning.

Director James Marsh will be more widely known for his work as a documentary filmmaker.  His credits include the brilliant Man On Wire (which won him an Oscar in 2009) and the highly acclaimed Project Nim.  The Theory Of Everything is a well-polished production that showcases the work of two crew members in particular – French cinematographer Benoît Delhomme (The Boy In Striped Pyjamas) and Icelandic composer Jóhann Jóhannsson (Prisoners).

Nominated for 5 Academy Awards including best picture, The Theory Of Everything provides both insight and comfort.  There are many ways to make a relationship work.