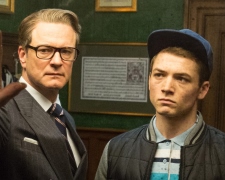 When it comes to making action films, English director Matthew Vaughn doesn’t like to take things too seriously.  Kick-Ass was about a shy, nerdish kid who took to the streets and tried to become a superhero (complete with a ridiculous green costume).  X-Men: First Class fabricated and put a lighter spin on the events behind the 1962 Cuban missile crisis.

Kingsman: The Secret Service follows in the same vein.  Drawing from a comic book series that was first published in 2012, Vaughn and co-writer Jane Goldman have created a light-hearted spy film that tries to offer something a little different from the heavier James Bond films with which we are all familiar.

It centres on a super-secret crime fighting organisation known as the Kingsman.  I’m not quite sure how the fund their elaborate headquarters but they operate outside the realms of the government (so that they can’t be interfered with).  They travel across the world, collate valuable intelligence information and yep, they kill a few bad guys.

Following the recent death of a Kingsman, the organisation is going through a recruitment phase.  A group of young men and women are being put through a series of high-pressure trials to see if they have the required physical strength and mental toughness to make it through.  The most unlikely of the candidates is Eggsy (Egerton) – a guy fresh out of high school who has had somewhat of a troubled upbringing.

There’s another story that runs concurrently through the film.  An experienced Kingsman, known by the codename of Galahad (Firth), is trying to find who is responsible for the death of a close friend.  It leads him to the home of Valentine (Jackson), an insanely wealthy telecommunications tycoon who has developed a sinister plan to solve the world’s climate change problem.

It’s not a full-on spoof like Austin Powers but Kingsman: The Secret Service is very aware of the clichéd world in which it operates.  It makes reference to other spies such as James Bond and Maxwell Smart.  It also throws in a few plot twists that you won’t find in the well-used “spy movie” textbook.  It’s invigorating to see a movie that takes a few chances.

There’s not a lot of coherence to the storyline.  If you think about it for more than a few seconds, you’ll realise that it makes even less sense than a traditional comic book adaptation.  There’s a method to the madness however.  The film culminates with a final half-hour that is so wonderfully absurd that it will leave many laughing loudly and repeatedly.

Kingsman: The Secret Service is quite violent and it pushes the boundaries of political correctness… but if you’re not upset by either of those attributes, you should find it a lot of fun.