Review: What We Did On Our Holiday 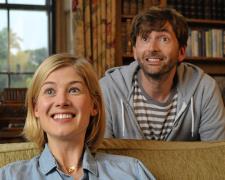 At first, I thought this was a light, silly English comedy.  Abi (Pike) and Doug (Tennant) are going on a road trip with their three children from London to the Scottish Highlands.  It’s so they can attend the lavish 75th birthday party of Doug’s father, Gordy (Connolly), who hasn’t been in the best of health.  The antics begin before they’ve even left home.  Jess, the youngest child, throws a tantrum when she’s not allow to take her “pet rocks” along for the ride.

Adding to the slapstick is the fact that Abi and Doug are separated… but they haven’t told anyone yet.  They’ve decided to keep the news to themselves so as not to ruin Gordy’s birthday celebrations.  When in front of others, it’s all smiles and sunshine.  When alone (or stuck in the car with the kids) it’s all insults and slander.  They just need to make it through the weekend and then they can return to their very separate lives.

The tone of the film shifts around the 30 minute mark and becomes much more dramatic.  We learn that Gordy has terminal cancer and doesn’t have long left to live.  While it seems to be creating stress and division within the family, Gordy isn’t too fussed.  If anything, it’s provided him with clarity.  He’d rather spend his final months doing what he loves – fishing and passing on wisdom to his grandkids.

It’s a weird sequence in the film with writer-directors Andy Hamilton and Guy Jenkin (Drop The Dead Donkey) unsuccessfully trying to juggle drama and comedy.  One minute, there’s a simple joke about lights that turn off when you clap. Next minute, you’ll be watching Gordy battle the effects of his cancer.  It’s also during this part of the movie where the fragile truce between Abi and Doug starts to unravel.  She says she’s talking the kids to live in Newcastle.  He locks her in the bathroom.  She threatens to scream “rape”.  So yeah, it’s no longer a “light, silly English comedy.”

If you think that’s strange, wait until you see what happens next.  A quick twist (which isn’t divulged in the film’s trailer) sets in motion a series of events that can be described as both shocking and unexpected.  Part of me admires the efforts of Hamilton and Jenkin to go push beyond comedic boundaries and give us something different.  However, the other part of me has concerns about their methods.  Do they want it to be a light comedy or a dark comedy?  The simplistic finale, complete with a shallow message, only adds to the confusion.

I’m not sure how much of their dialogue was scripted but it’s the three children, played by Emilia Jones, Amelia Bullmore and Bobby Smalldridge, who get the most laughs.  They’re proof that kids can say some very odd things.  Billy Connolly features in a few nice scenes (he’s always the voice of reason) but the remaining members of the adult cast feel like they’re working too hard to sell their eccentric personalities.

Featuring one of the year’s more boring titles, What We Did On Our Holiday opens a few interesting doors but isn’t brave enough to walk through them.