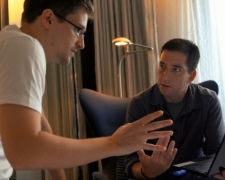 There are a lot of different ways to make a movie but I don’t think I’ve heard a back story quite like this before.  In early 2013, documentary filmmaker Laura Poitras received a series of anonymous emails from someone who identified himself as “a senior government employee in the intelligence community” and went by the codename of Citizen Four.  He claimed to have proof that the National Security Authority (NSA) was secretly monitoring the activities of American citizens like never before.

Exchanging emails over the next few months, the two finally agreed to meet in a Hong Kong hotel room in June 2013.  He introduced himself as Edward Snowden, a 29-year-old contractor who worked for the NSA.  His laptop contained a number of classified, eye-raising documents that showed the NSA were engaging in wide-scale surveillance without any authority (or so it would seem).  They had denied this publicly but the evidence clearly suggested otherwise.

Over the next few days, Poitras shot more than 20 hours of footage inside of Snowden’s small hotel room.  She asks him about the information he has, how he gained access to it, and why he wants to blow the whistle.  We’re not looking at events with the benefit of hindsight.  We’re looking at “real time” footage of Snowden as he goes from a complete unknown… to one of the world’s most talked about figures.  As a documentary filmmaker, it’s the kind of access that you can only dream of.

It’s riveting to watch.  Those not familiar with the subject matter are likely to be shocked at how easy it is to spy on someone.  The NSA had relationships with most major telecommunications companies that allowed them to tap and track mobile phones.  They could access live footage shot by drones that hovered quietly above suburban streets.  They could link data, such as that provided by credit cards and public transport cards, that could help trace someone’s movements.

Equally enthralling is the film’s exploration of Snowden himself.  He realises that once the information goes public, his life will be forever changed.  He knows he’ll never be able to return home.  He knows the United States Government will label him a traitor.  He knows the NSA will thoroughly interrogate his friends and family.  It highlights the heavy personal price that one must pay to be a whistle blower.  Did he do the right thing?  Could he have gone about it in a different way?  What would you have done in the same situation?

Snowden was also careful with who entrusted with the information.  He didn’t want to take a Wikileaks-type approach and release thousands of documents to the world’s media.  Instead, he cherry picked a small number of knowledgeable journalists who he met in Hong Kong.  It was The Guardian’s Glenn Greenwald who published the first story on 5 June 2013.  We see Greenwald throughout the film and he shares some great exchanges with Snowden as they debate when to realise his true identity.

As the frontrunner in the best documentary category for next week’s Academy Awards, Citizenfour is something quite special.  Snowden became one of the world’s most wanted individuals.  Poitras had unfettered access to him and could have sold her footage instantly to thirsty news networks for a small fortune.  Yet, she remained patient and kept it quiet as part of a much broader goal – to create a compelling, real-life thriller that takes us inside the mind of a whistle blower.