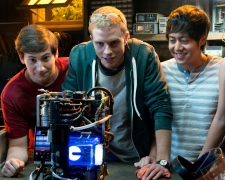 Time travel movies have become a staple of American’s film culture.  Things took off in the 1980s with the Back To The Future, Terminator and Bill & Ted franchises. It’s continued on to the current day with recent entries including Looper, About Time and Predestination.  Even the great Woody Allen has contributed to the genre!  Midnight In Paris won him a screenwriting Oscar three years ago.

Two new entries are about to be released in cinemas.  Hot Tub Time Machine 2 will be out during the upcoming Easter school holidays but the first cab off the rank is Project Almanac.  It begins with a high school student, David (Weston), rummaging around in his attic and stumbling across an old video camera owned by his late father.  The tape inside contains footage of David’s 7th birthday party and it helps revive a few childhood memories.

There’s something odd about the tape though.  There’s a brief moment where David can see his 17-year-old self in the background.  How is that even possible?  A trip to the basement provides the answers he’s looking for.  Hidden in a small compartment under the floor are the blueprints for a time machine.  David’s not sure he can put it together but his good friend, Quinn (Lerner), comforts him with the knowledge “I think we already did build it.”

There’s a long, forgettable lead up here.  It feels like we’re half-way through the film before they finally end up building the machine and head back in time.  What follows is some generally goofy stuff.  There’s a lengthy sequence where Quinn keeps recreating a particular day at school so that he can get full marks for a science quiz.  It contrasts a shorter scene where they try to win the lottery, accidentally get one number wrong, and then decide not to travel back.  I have no idea why.

Directed by Dean Israelite, this is a movie targeted squarely at teenagers.  It’s shot with handheld cameras using the “found footage” approach.  The cast consists of young, largely unknown actors.  Its characters are dealing with bullies and discovering love for the first time.  It’s kept fairly simple and I wouldn’t say there’s much for older audiences.

Aside from the last 20 minutes or so, this is a film with zero tension.  We’re just watching a bunch of people have a good time.  They go to music concerts and they buy fast cars.  It’s not until the very end where writers Andrew Deutschman and Jason Pagan have decided to create something more dramatic.  It’s what you’d expect though.  By going back in time too often, they start to alter the current day universe.  It then becomes a question of whether they can return things to normal.