Review: A Most Violent Year 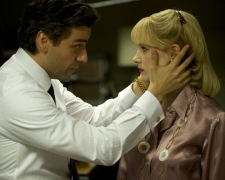 New York 1981.  Abel Morales (Isaac) is the owner of a heating oil company who is looking to expand his business.  He’s put a substantial deposit down on a waterfront property which will give him a significant advantage over his competitors.  Firstly, he’ll be able to get his product directly from the oil tankers with no further transport required.  Secondly, he’ll have a huge storage facility that will allow him to build up his stock reserves when oil is cheap.

Abel is a smart, well-dressed businessman but not everyone is a fan.  The authorities, headed by Assistant District Attorney Lawrence (Oyelowo), have spent two years investigating Abel’s company for rigging scales and underreporting income.  They’ve almost got enough evidence to press charges.

Abel releases he has a few more enemies after a number of his oil trucks are held up and stolen.  He suspects that his competitors, unhappy with his increasing market share, are looking to slow his momentum.  Their actions have the desired effect.  The union starts making its presence felt because the workers don’t feel safe.  The bank starts to get nervous about providing a loan for the new property.

A Most Violent Year marks the third feature film of writer-director J.C. Chandor (Margin Call, All Is Lost).  He’s what I’d describe as a patient storyteller.  This isn’t an overly complex tale.  It’s not filled with twists or elaborate action sequences.  It’s a realistic, dialogue-driven drama that wants you to look at these characters and then ask whether they’re doing the right thing.

It’s a little slow in places but the performances more than compensate.  Oscar Isaac (Inside Llewyn Davis) is terrific as Abel.  He’s a man inundated with problems but he refuses to lose his cool… at least on the outside.  He believes in what he’s doing and believes that he’ll be rewarded for his hard work.

Jessica Chastain (The Help) is equally impressive as his wife, Anna.  Given that Abel originally purchased the business from her late father, Anna has taken an active role in the company.  She’ll stand by her husband’s side publicly but she’s certainly not afraid to voice her own opinions while speaking privately.  The film’s other notable performance comes from Albert Brooks (Drive) as Abel’s loyal but somewhat tired-looking attorney.

As was the case with his last two films, A Most Violent Year is an original screenplay from Chandor.  It’s not based on a novel and it’s not based on any actual event.  He wanted to make a movie that illustrates the way in which successful businessman think ahead and take risks on route to building an empire.  There’s a great line where Abel tells someone – “when it feels scary to jump, that’s exactly when you jump.”

The film was largely overlooked during the recent awards season in the United States.  That’s why it’s getting a delayed (and limited) release in Australia as opposed to nabbing a prime “get ready for the Oscars” slot in January and early February.  Hopefully a few people get the chance to see it before another wave of summer blockbusters engulfs us.