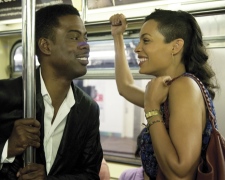 If you can’t find the role that you’re looking for in Hollywood, why not write one yourself?  It’s a theory that many actors have put into practice.  Ben Affleck and Matt Damon wrote Good Will Hunting.  Steve Carell teamed up with Judd Apatow to create The 40-Year-Old Virgin.  Simon Pegg kick started his career by writing Shaun Of The Dead.

Chris Rock is the latest name to add to that list.  Rather than creating a work of pure fiction, he’s crafted something that blends both fiction and reality.  His inspiration came from other comedians who have done something similar on the small screen – Jerry Seinfeld in Seinfeld, Larry David in Curb Your Enthusiasm and Louis C.K. in Louie.  In of those sitcoms, the lead actor plays a kind of warped version of themselves.

In Top Five, Rock plays Andre Allen – one of the most successful comedians on the planet.  He can’t even walk down the street without being asked for an autograph or a photo.  It’s part of the reason he keeps a low-profile bodyguard (Smoove) with him at all times.  Allen is widely known for his successful comedic film franchise, Hammy The Bear, and is on the verge of marrying a well-known reality television star (Union).

Allen wants to do something different though.  He’s tired of playing the same character on screen.  He’s branched out and taken on a dramatic role set around the Haitian Revolution at the end of the 18th Century.  It’s been savaged by critics but Allen has ramped up his publicity tour as he tries to convince his fans to buy tickets for the opening weekend.

The film chronicles his whirlwind trip to New York City where he meets up with a journalist named Chelsea Brown (Dawson) who is looking to put together a feature story for The New York Times.  She’s not interested in asking the same boring questions as other media outlets.  They want to talk more about his upcoming wedding than the film itself.  Rather, Brown wants to unearth the “real” Allen.  She wants to know why he doesn’t want to make “funny movies” anymore and whether his battles with alcoholism were part of the reason.

Top Five is a film that’s trying to cover a lot of material in a short period of time.  It looks at broad topics such as the price of being famous, the way in which film journalists operate, and the pressure faced by comedians to continually be funny.  There are also more dramatic elements such as Allen’s alcohol-fuelled past, his rocky relationship with his family, and his inability to find love outside of the public eye.  How much of this mirrors Rock’s real life?  It’s kind of hard to tell (not that it should matter).

There are some great sequences in this film – both comedic and dramatic.  There’s one where Allen tries to link the assassination of Martin Luther King to the original Planet Of The Apes movie.  There’s another where he professes his admiration for fellow comedians such as Bill Murray and Eddie Murphy.  It’s these moments that you’re likely to remember as you leave the theatre.

It’s obvious from the get-go that a romantic connection will develop between Allen and Brown.  Sadly, how Rock has gone about this subplot is too formulaic.  Both characters are given a clear cut reason why they need to split from the respective partners.  Then, just when you think the two leads will end up together, a convoluted point of friction is created to add drama.  It just doesn’t feel authentic.

Rock’s independently-funded film was extremely well received when it premiered at the Toronto Film Festival last September and a studio bidding war followed.  In the end, Paramount picked up the rights for $12.5 million and released it on close to 1,000 screens across the United States.  I love the irony in that Rock, who was struggling to land dramatic roles, finally found one… playing a character who was struggling to land dramatic roles.